In the past week, Ryanair Holdings (RYAAY - Free Report) raised its 5-year traffic growth forecast from 33% to 50%. The European carrier now expects traffic to grow to more than 225 million guests per year by March 2026 compared with 200 million predicted earlier.

1.Ryanair, currently carrying a Zacks Rank #3 (Hold), expects fiscal 2022 traffic in the range of 90-100 million compared with 27.5 million guests in fiscal 2021.The carrier aims to take delivery of 210 Boeing 737 aircraft over the next five years. The company expects these planes, which would lower costs and reduce emissions, to accelerate its post-COVID growth.

2. Under this extended deal, Gol Linhas will receive an equity investment of $200 million (R$1.05 billion) from American Airlines. This additional liquidity is expected to strengthen Gol Linhas’ balance sheet. The new agreement expands beyond the terms of the existing codeshare partnership (which has been in place since February 2020) between the carriers. As a result of the code sharing pact, passengers of either carrier can purchase tickets of the connecting flights using one reservation. American Airlines, through this exclusive codeshare agreement, expects to increase commercial cooperation with the Brazilian carrier to accelerate growth and create a more seamless experience for customers.

3. According to an update from the White House, travel restrictions on air passengers from countries like China, India, Britain and other European nations into the United States will be eased from November this year. Per White House COVID-19 coordinator Jeff Zients, foreign nationals will have to be fully vaccinated when they fly to the United States in November. They will have to demonstrate proof of vaccination before boarding. Further, the travelers have to test negative for the coronavirus, which they have to undergo within three days of their flight. Zients ruled out the need to quarantine for the fully-vaccinated passengers.

The development is a major positive, especially for the Delta-variant-hit U.S. airlines. Many of the carriers expect third-quarter 2021 results to be dented by the spread of the Delta strain in the United States. Their bearish third-quarter views were discussed in detail in the previous week’s write-up.

4. The Justice Department believes that the alliance between American Airlines and JetBlue will reduce competition, leading to higher fares. Per Attorney General Merrick Garland, “In an industry where just four airlines control more than 80% of domestic air travel, American Airlines' alliance with JetBlue is, in fact, an unprecedented manoeuvre to further consolidate the industry."

American and JetBlue vowed to fight the lawsuit and continue with their alliance unless directed otherwise by a court. The partnership was announced last year. JetBlue and American Airlines already started coordinating on flights in the Northeast. Garland is, however, of the view that “It would result in higher fares, fewer choices, and lower quality service if allowed to continue.”

5. United Airlines (UAL - Free Report) is expanding its footprint in Africa with a new service between Washington, D.C. and Lagos, Nigeria, set to be launched on Nov 29, subject to government approval. The airline will operate three weekly flights between the U.S. capital and the popular African destination. This is the company’s first ever nonstop service between Washington, D.C. and Nigeria. 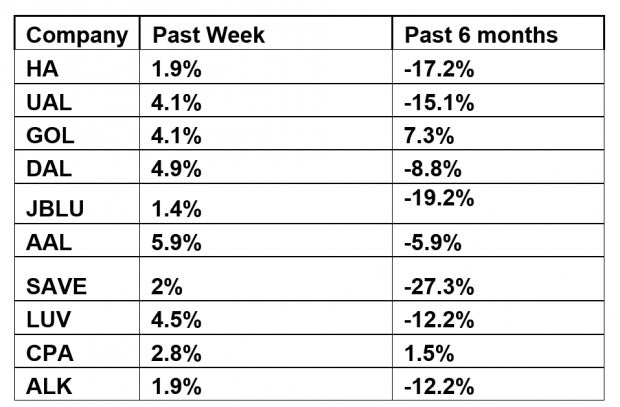 The table above shows that the airline stocks have traded in the green over the past week, aided by the announcement from the White House pertaining to the easing of international travel curbs. The NYSE ARCA Airline Index has increased 3.5% over the past week to $94.23. Over the course of six months, the sector tracker has decreased 6.6%.

Investors will await more updates on the American Airlines-JetBlue partnership in the coming days.