Is the Dividend Hike Enough to Help APA Turn Attractive?

APA Corporation (APA - Free Report) recently got approval from the board of directors to increase the quarterly dividend by 3.75 cents to 6.25 cents per share. The new payout will be made on Nov 22 to its common shareholders of record on Oct 22.

APA management sees the dividend hike as the beginning of its path to return ‘a higher percentage of cash flow’ to its investors. This comes after the upstream operator opportunistically brought back its debt to improve its financial position. In August, APA repurchased $1.7 billion in debt via an upsized tender offer, which allowed the company to reduce its annual interest expense by 20%, or approximately $78 million — more than enough to take care of its annual dividend obligation of $57 million.

At its September investor update earlier in the month, APA said that it is on track to generate $1.6-$1.7 billion in upstream free cash flow for the full year, assuming the current strip prices for the second half of 2021. This, together with the company’s aggressive cost management initiatives, should help in its debt reduction goal and achieve its leverage target of less than 1.5 times debt-to-EBITDA. Meanwhile, APA’s annual investment requirement will be some $1.2 billion.

APA’s Suriname portfolio is particularly exciting, where it continues to achieve significant drilling success with four discoveries since January 2020. The company has partnered with TotalEnergies (TTE - Free Report) in this region, which lies off the north coast of South America. Over time, Suriname is expected to become one of APA’s major assets with significant cash flow potential.

All of this sets it up well for the long-term sustainability of APA’s free cash flow generating capacity and future increases in dividend. But one thing that may concern potential investors is that even with the 150% hike this quarter, APA’s annual dividend of 25 cents per share yields 1.16%, which is still low.

It compares unfavorably to the 1.57% and1.34% yields offered by peers Marathon Oil (MRO - Free Report) and Hess (HES - Free Report) , respectively. Meanwhile, the S&P’s dividend yield is around 1.3% and therefore APA’s payout is not enough to attract dividend-oriented investors. This is probably the primary reason behind the company’s Zacks Rank #3 (Hold) and its relative underperformance to the industry year to date (+51.8% versus +78.9%). 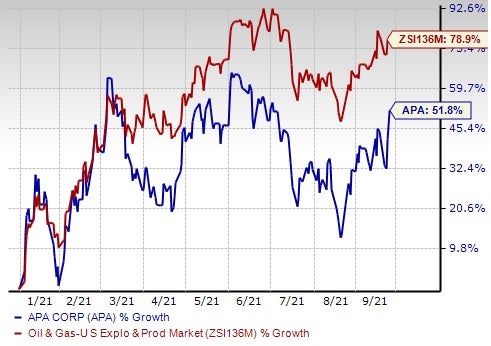 We believe that sustained periods of higher oil and gas prices might help APA to achieve its long-term target of increasing its base dividend yield to a level in line with or above the S&P 500. That in turn might help the stock to catch up.