Macquarie Infrastructure Holdings, LLC (MIC - Free Report) yesterday announced an offer to buy back its entire 2.00% convertible senior notes, which are due to mature in 2023. Concurrently, the company communicated the successful completion of the divestment of the Atlantic Aviation business to New York-based KKR & Co. Inc.

The reorganization plans were announced by Macquarie Infrastructure Corporation in February and shareholder approval for the same was received in May.

Regarding the buyback offer, the company is willing to repurchase the notes at a price equal to the summation of the principal amount per note, and any unpaid and accrued interest on it. The offer price might come in as $1,001.17 per senior notes. The total outstanding principal amount of 2.00% convertible senior notes due 2023 was approximately $34 million as of Sep 23, 2021.

Each $1,000 principal amount of the convertible senior notes can be converted into 12.6572 units of Macquarie.

About the Atlantic Aviation divestment, Macquarie completed the transaction for $4.475 billion, which includes $1 billion of assumed debt. The parties entered the divestment deal on Jun 7, 2021.

September Announcement: On Sep 22, 2021, the MIC Hawaii businesses were distributed to Macquarie, with the former becoming a direct subsidiary of the latter. This move, in turn, will help Macquarie to divest the businesses to an affiliate of Argo Infrastructure Partners, LP.

The divestments, including the Atlantic Aviation business, the MIC Hawaii businesses and others, are in sync with the company’s strategic alternatives (announced in October 2019), which include disposing of businesses to unlock values for its shareholders.

June Announcement: On Jun 14, 2021, Macquarie Infrastructure Corporation entered an agreement to divest its MIC Hawaii businesses to Argo Infrastructure’s affiliate. Subject to the receipt of necessary approvals and the fulfillment of customary conditions, the company anticipates the transaction to be complete in the first half of 2022.

Macquarie Infrastructure Corporation’s MIC Hawaii segment comprises several smaller businesses as well as an energy company — Hawaii Gas — which processes and distributes gas, and provides related services. These are collectively engaged in reducing costs as well as improving the reliability and the sustainability of energy in Hawaii.

Earlier Event: In December 2020, Macquarie Infrastructure Corporation completed the divestment of its liquid storage and handling business, International-Matex Tank Terminals, for $2.67 billion to an affiliate of Riverstone Holdings, Inc.

With a market capitalization of $3.5 billion, the company currently carries a Zacks Rank #3 (Hold). In the past three months, its unit has gained 5.4% compared with the industry’s growth of 5.3%. 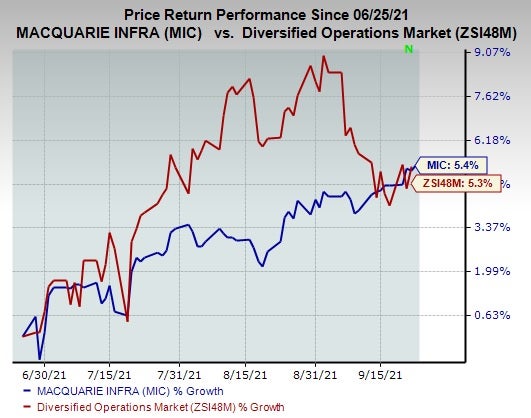 In the past 60 days, earnings estimates for the companies have improved for the current year. Also, earnings surprise for the last reported quarter was 100% for Raven, 3.35% for Carlisle and 31.65% for Crane.

4 Stocks to Watch as the Gaming Space Continues to Boom