Here's Why You Should Retain Masimo (MASI) Stock For Now

Masimo Corporation (MASI - Free Report) is well poised for growth in the coming quarters, backed by its slew of product launches over the past few months. A robust second-quarter 2021 performance, along with a few regulatory approvals, is expected to contribute further. Overdependence on Masimo SET and foreign exchange woes persist.

The renowned global provider of non-invasive monitoring systems has a market capitalization of $15.68 billion. The company projects 16.4% growth for 2022 and expects to maintain its strong performance. Masimo has delivered an earnings surprise of 15.27% for the past four quarters, on average. 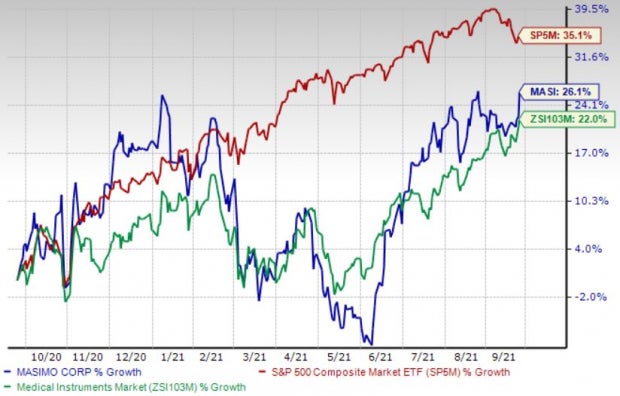 Product Launches: We are upbeat about Masimo’s introduction of a slew of products over the past few months. The company, this month, announced its receipt of the CE Mark for and the commercial launch in Europe of the single-patient-use adhesive rainbow, SuperSensor, compatible for use with both Masimo and third-party monitors with Masimo rainbow technology.

In August, Masimo announced its receipt of the CE Mark for and the launch in western Europe of Masimo SafetyNet Alert, an arterial blood oxygen saturation monitoring and alert system designed for use at home.

Regulatory Approvals: We are optimistic about Masimo’s impressive progress on the regulatory front, with respect to its products. The company received two CE marks for its products, one each in September and August, following which it launched the products.

Masimo, in June 2021, announced receipt of the FDA 510(k) clearance for its wearable, wireless thermometer — Radius T° — for both prescription and over-the-counter use on patients and consumers above the age of five.

Strong Q2 Results: Masimo’s solid second-quarter 2021 results buoy our optimism. The company recorded a strong rebound in sensor sales (on the back of steady expansion of monitoring in hospitals), along with robust order shipments, which is encouraging. Expansion of the company’s installed base is also impressive. A slew of favorable studies on Masimo’s launches over the past few months is also impressive. Expansion of adjusted operating margin bodes well for the stock. A raised financial outlook for 2021 augurs well.

Overdependence on Masimo SET: Masimo currently derives the majority of its revenues from its Masimo SET platform, Masimo rainbow SET platform and related products. Thus, the company’s business is highly dependent upon the continued success and market acceptance of its proprietary Masimo SET and Masimo rainbow SET technologies that serve as the basis of its primary product offerings. Continued market acceptance of products incorporating these technologies will depend upon Masimo continuing to provide evidence to the medical community that its products are cost-effective and offer significantly improved performance compared to conventional pulse oximeters.

Foreign Exchange Woes: Masimo markets its products in certain foreign markets through its subsidiaries and other international distributors. As a result, events that result in global economic uncertainties could significantly affect its results of operations in the form of gains and losses on foreign currency transactions, and potential devaluation of the local currencies of Masimo’s customers relative to the U.S. dollar. While a majority of the company’s sales are transacted in U.S. dollars, some of its sales agreements with foreign customers provide for payment in other currencies. These foreign currency revenues, when converted into U.S. dollars, can vary depending on the approximation of the exchange rates applied during a respective period.

Masimo is witnessing a positive estimate revision trend for 2021. In the past 90 days, the Zacks Consensus Estimate for its earnings per share has moved 0.5% north to $3.85.

The Zacks Consensus Estimate for the company’s third-quarter 2021 revenues is pegged at $295.7 million, suggesting a 6.3% improvement from the year-ago quarter’s reported number.