Valued at $258.5 million, the contract is expected to conclude in September 2024. As part of the contract, Pratt & Whitney will be involved in procuring non-recurring sustainment support, material and support equipment for depot activations coupled with supplies, services, and planning for depot activations in support of F-35 aircraft. The contract will serve the U.S.Air Force, Marine Corps, Navy, non-U.S. Department of Defense (DOD) participants and Foreign Military Sales customers.
Majority of the work related to the contract will be executed in East Hartford, CT and Oklahoma City, OK.

Pratt & Whitney’s Involvement in F-35 and its Benefits

The United States continues to dominate the combat aircraft space, with the F-35 Joint Strike Fighter jet program being one of the key catalysts. Consequently a strong inflow of orders from Pentagon and other U.S. allies are observed frequently for this jet as it remains a top-notch stealth aircraft.
Thus, Pratt & Whitney, which offers its combat-proven engine to this jet that powers all three variants of the F-35 fighter jets, benefits from the strong demand that F-35 enjoys. It is imperative to mention in this context that the latest contract that Raytheon has won is in connection with the $6.6 billion contract that Lockheed secured earlier this month involving sustainment efforts for its F-35 fleet.
Per a few reports, Pratt & Whitney has proposed to upgrade the F-35 engine with a more enhanced version that would provide a 11% improvement range, 10% rise in thrust and 50% increase in thermal management. The enhanced version of the jet will undoubtedly fuel further demand for the same.

Intense geo-political tensions globally have resulted in countries strengthening their defense system. This has resulted in huge demand for defense products. Consequently, combat aircrafts have also recorded a surge in demand over the past few years. The United States, which is the largest exporter of military weaponries worldwide, is focused on strengthening its military resources.
This is quite evident from the allotment of a $12 billion investment plan, in the U.S. fiscal 2022 defense budget, for 85 F-35 jets. So, we may expect a solid flow of contracts from the Pentagon involving F-35 Joint Strike Fighters, which in turn will boost Raytheon’s top-line performance in days ahead.
Other aerospace majors namely Northrop Grumman (NOC - Free Report) and BAE Systems (BAESY - Free Report) will also benefit from such solid order flows for F-35, as these are leading production supporters of the aircraft.

In the past one year, shares of Raytheon Technologies have gained 48% compared with the industry’s growth of 12.6%. 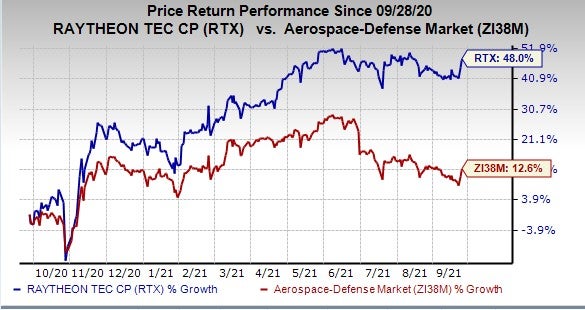