5 Reasons to Add OUTFRONT Media (OUT) to Your Portfolio Now

Shares of OUTFRONT Media (OUT - Free Report) have appreciated 16.3% in the past six months compared with its industry's 10.2% growth. 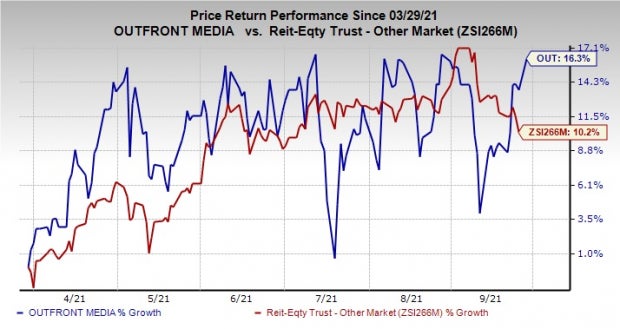 What’s more, this Zacks Rank #1 (Strong Buy) stock has been witnessing an upward trend in its funds from operations (FFO) per share estimate revisions for the current year, indicating a favorable outlook for the company. Particularly, the Zacks Consensus Estimate for 2021 FFO per share has been revised 8% upward in two months’ time. Given its progress on fundamentals and the positive estimate revisions, the stock is likely to keep performing well in the quarters ahead. Let’s now delve deeper into its strengths.

Portfolio Diversity: OUTFRONT Media’s advertising sites are geographically diversified, with presence across 150 markets in the United States and Canada. This large-scale presence enables its clients to reach a national audience and provides the flexibility to tailor campaigns for specific regions or markets. Apart from providing communication and advertising services to several transit authorities, this out-of-home (OOH) advertising company offers services to various industries, including professional services, healthcare/pharmaceuticals, and retail. Hence, its diversity, both industry wise and geographical, makes the company’s revenues less volatile in nature.

Revenue Strength: Amid the rebound in the advertising environment, OUTFRONT Media is well poised to make steady progress in improving its top line. Revenues are projected to witness year-over-year growth of 16.1% and 17% in 2021 and 2022, respectively, to $1.43 billion and $1.68 billion.

Focus on Digital Billboards: OUTFRONT Media has been making strategic investments in its digital-billboard portfolio over the years. During the first half of the ongoing year, the company has built or converted 38 new digital billboard displays in the United States. With this, the U.S digital billboard count increased to 1,302 as of Jun 30, 2021, from 1,176 at the end of second-quarter 2020. These reflects the company’s efforts to convert its business from traditional static-billboard advertising to digital displays, which are helping expand the number of new advertising relationships, in turn, providing scope to boost digital revenues.

Industry Tailwinds: As the cost of advertisement through the OOH medium is also comparatively lower than other media alternatives, the OOH advertising space has been gaining traction with a significant increase in its market share in comparison with other forms of media. In the upcoming years, higher technology investments are likely to provide further support to OOH advertising. Capitalizing on this, the company is expanding its footprint and providing unique technology platforms like OUTFRONT Mobile Network to offer advertisers additional data-analytic features and helps draw more audience.

Acquisitions: OUTFRONT Media has also capitalized on acquisitions to enhance its portfolio. The company shelled out $42.7 million in the first half of 2021 and $18.1 million in 2020 for acquisitions. In 2019, the company completed a number of acquisitions for a total price of $69.7 million. With such expansion efforts, the company is poised to grow over the long term.

The Zacks Consensus Estimate for CorePoint Lodging Inc.’s (CPLG - Free Report) 2021 FFO per share has moved significantly upward to 99 cents over the past two months. The company currently sports a Zacks Rank of 1.

The Zacks Consensus Estimate for Whitestone REIT’s (WSR - Free Report) ongoing-year FFO per share has moved up 8.6% over the past two months. The company flaunts a Zacks Rank of 1, currently.

The Zacks Consensus Estimate for The GEO Group’s (GEO - Free Report) current-year FFO per share has moved 12.2% north in the past 60 days. The company sports a Zacks Rank of 1, at present.