Regal Beloit Corporation along with Rexnord Corporation yesterday provided another update on their pending business combination deal signed in February 2021. This is the fourth update so far this month.

Before discussing further, it is worth noting here that the deal between the companies calls for the combination of Regal Beloit’s operations with Rexnord’s Process & Motion Control (“PMC”) segment. The transaction has been valued at $3.69 billion.

As noted, the parties estimate the exchange ratio to be 0.2230 for the deal, implying that shareholders of each share of Land Newco will have the right to receive 0.2230 shares of Regal Beloit. The exchange of shares will result in the acquisition of Land Newco by Regal Beloit. For further information refer to “September announcements” given below.

The above-mentioned exchange ratio and special cash dividend are estimates and might be subject to changes by the companies involved in the deal.

September announcements: On Sep 17, 2021, the parties involved announced that Rexnord will initially distribute shares of Land Newco, Inc. to its shareholders in the form of a pro-rata dividend. Land Newco is a wholly-owned subsidiary of Rexnord and is the owner of its PMC business. The record date of the pro-rata dividend is fixed at Sep 29, 2021, and the payment date is set at Oct 4.

The above-mentioned process will result in the spin-off of Land Newco. Post this, Regal Beloit will acquire Land Newco in a stock transaction, which, in turn, will become its wholly-owned subsidiary. Also, Regal Beloit will reward its shareholders with a payment of a special cash dividend for which the record date has been set at Oct 1. The payment date for the same has been fixed at Oct 5.

On Sep 13, 2021, the parties involved announced that they anticipate completing the deal on Oct 4. The consummation, however, is still subject to the fulfillment of closing conditions or waiver of the same.

Upon completion, Regal Beloit will be renamed as “Regal Rexnord Corporation”, while it will trade on the NYSE under the symbol “RRX”. Rexnord will be known as “Zurn Water Solutions Corporation” and its stock’s trade symbol on the NYSE will be “ZWS”.

On Sep 1, 2021, Regal Beloit received shareholders’ approval for the issuance of common shares. Also, the company’s shareholders approved to make changes in the company’s Articles of Incorporation. This will enable it to change its name and increase authorized shares.

August announcement: Regal Beloit announced planned changes to its power transmission business, which is subjected to the closing of the above-mentioned deal. The company intends on grouping its power transmission business — including its existing Power Transmission Solutions (“PTS”) segment and Rexnord’s PMC segment — under the Motion Control Solutions (“MCS”) segment. The MCS segment will be led by Kevin J. Zaba and its president, Integration will be Jerry Morton. While Zaba is currently capacitated as the president of PMC, Morton is the current president of PTS.

With a market capitalization of $5.8 billion, Regal Beloit currently carries a Zacks Rank #3 (Hold). The company anticipates benefiting from strengthening end markets and margin improvements in 2021. Interest expenses, any disruptions from the supply chain and COVID shutdowns are concerning.

In the past three months, the company’s shares have gained 12% compared with the industry’s growth of 0.3%. 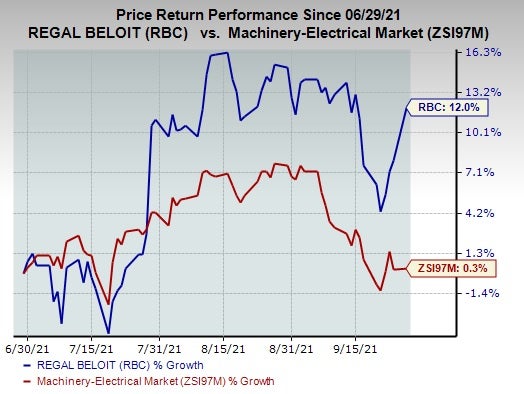 In the past 60 days, earnings estimates for both companies have improved for the current year. Further, earnings surprise in the last reported quarter was 11.22% for Emerson and 10.97% for Eaton.

5 Reasons to Add OUTFRONT Media (OUT) to Your Portfolio Now