Biogen Inc. (BIIB - Free Report) and partner Eisai Co announced that they have initiated a rolling submission of a biologics license application (BLA) for its anti-amyloid beta protofibril antibody candidate, lecanemab (BAN2401). The BLA is seeking approval for the candidate as a treatment for early Alzheimer’s disease (AD) under an accelerated pathway.

The BLA is primarily supported by clinical, biomarker and safety data from a phase IIb study evaluating lecanemab in patients with early AD and confirmed amyloid pathology. Data from the study has shown that treatment with the candidate led to a high degree of decline in amyloid beta plaque, a key criterion for the measurement of disease improvement in AD patients. The study data also showed that treatment with lecanemab resulted in a consistent reduction of clinical decline across several clinical endpoints. More than 80% of patients evaluated in the mid-stage study achieved amyloid negative status as early as 12 months of treatment.

The company stated that the correlation between the extent of reduction in amyloid beta and effect on clinical endpoints in the mid-stage study is reasonably likely to predict clinical benefit following treatment with the candidate.

Lecanemab was granted Breakthrough Therapy designation in June which will likely expedite the review process of the BLA for the candidate.

Shares of Biogen have gained 17.1% so far this year against the industry’s decrease of 1.3%. 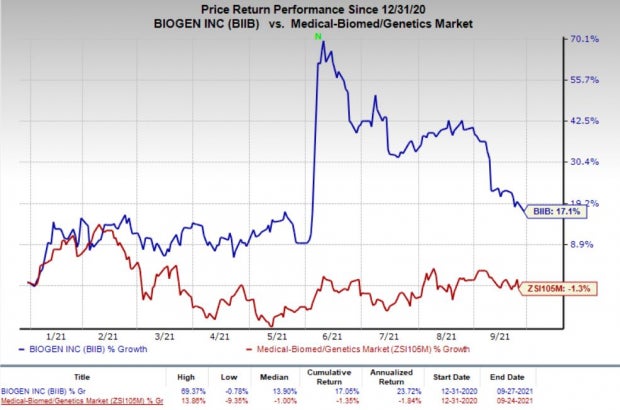 Biogen gained approval for its first FDA-approved AD drug, Aduhelm, to reduce the clinical decline associated with this devastating disease in June. The drug was approved for patients with mild cognitive impairment or mild dementia due to AD. However, the company stated earlier this month that launch of Aduhelm is not going too well and is facing some near-term challenges.

A potential approval to lecanemab will boost Biogen’s AD portfolio. The drugs together are likely to drive the company’s topline given huge unmet demand. However, several biotechs are engaged in developing a treatment for AD including INmune Bio (INMB - Free Report) , Cassava Sciences (SAVA - Free Report) and AC Immune (ACIU - Free Report) . Successful development of the candidates of these companies will increase competition in the AD space.