Masimo Corporation (MASI - Free Report) recently announced the favorable findings of a study published in the European Journal of Pediatrics, which evaluated the company’s EMMA Portable Capnograph. The researchers associated with the study concluded that Masimo’s EMMA can be considered to be an effective monitoring device for mechanically ventilated pre-term infants (neonates).

For investors’ note, the FDA has not approved the use of EMMA for neonates.

The latest positive study outcome is a major stepping stone for Masimo’s patient-monitoring business across the world.

The researchers noted the significance of maintaining an appropriate range of partial pressure of arterial carbon dioxide (PaCO2) in preterm infants, particularly while undergoing mechanical ventilation in the neonatal intensive care unit. This was the primary reason that drove them to assess whether non-invasively monitoring end-tidal carbon dioxide (EtCO2) with EMMA could aid in maintaining neonatal PaCO2 in the delivery room.

EMMA proved to be a better choice on the back of its portability and its offering of a solution with a small dead space (the volume of inhaled air that does not take part in the exchange of oxygen and carbon dioxide) of 1 mL.

Researchers associated with the study also noted that the latter's highlight was the collection of intervention data prospectively and demonstrating the feasibility of utilizing a portable capnometer during resuscitation of intubated preterm infants. Per the researchers, this study was the first of its kind.

Per a report by MarketsAndMarkets, the global patient-monitoring devices market is projected to reach $55.1 billion by 2025 from $36.4 billion in 2020, at a CAGR of 8.6%. Factors like technological advancements and growing preference for telehealth services amid the pandemic are expected to drive the market.

This month, the company received the CE mark for and commercially launched the single-patient-use adhesive rainbow, SuperSensor, in Europe. The SuperSensor is compatible for use with both Masimo and third-party monitors with Masimo rainbow technology.

Also this month, Masimo announced the favorable findings of a study after evaluating the ability of the Masimo Oxygen Reserve Index (ORi) to predict mild hypoxemia (an abnormally low oxygen concentration in blood) during endotracheal intubation in ICU patients. The findings of the prospective blinded observational study were published in Annals of Intensive Care.

In August, the company received the CE mark for its SafetyNet Alert and introduced the same in western Europe. This system features a SET wearable fingertip pulse oximetry sensor that offers wireless communication to an accompanying Home Medical Hub and smartphone app. 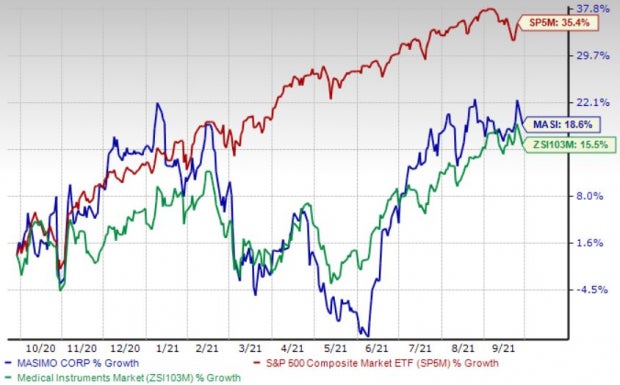 Netflix's (NFLX) Squid Game Set to be Its Most Popular Show