The market remains on its toes as investors digest the ton of information hitting us about now.

Perhaps the most significant in all that is the rising bond yield. Rising yields are negative for stocks because they’re considered risk-free investments. So when yields rise, it makes more sense for investors to get into safe bonds rather than risky stocks. So stocks need to generate well above those yields to continue attracting investors.

But yields rise both on account of growth and inflation. When they’re rising on account of growth, cyclicals (sectors that rise and fall with the business cycle) usually do well. That’s because in a growth environment, they generate stronger cash flows and are able to pay more dividend, which provides some buffer to these stocks, i.e. makes them less risky. Restaurants, hotels, consumer discretionary, furniture, premium/specialty retailers, auto, etc fall in this group.

Also, in inflationary conditions, investors need higher returns to offset the impact of inflation, so they would pull money out of bonds, which would drive yields. Rising energy prices are a major cause of inflation. Oil is hitting $75 a barrel (WTI) or $79 (Brent) and natural gas prices are also on the rise.

We’re looking at much costlier heating this winter, for both commercial operations and individuals. This situation isn’t changing soon. In fact, Goldman Sachs sees Brent oil hitting $90 by year-end because of production disruption from hurricane Ida.

So deciding the correct strategy is trickier now because we’re having a little bit of both. And especially when you consider that rising fuel costs are going to add to the rising input costs, making everything that much more expensive for the consumer (when companies are able to transfer the excess, as they have been doing so far). There’s also the concern that we’re headed for higher taxes, but maybe that will hold for some time.

More immediate is the conversation around the debt ceiling and what could happen if it isn’t raised (it has always been raised in the past and will in all probability be raised again) and the chances of a government shutdown. It is ultimately likely to have no material impact on stocks, but could increase volatility in the near term.

So there’s too much going on right now. And it’s probably a good idea to look for safer bets with more or less steady earnings growth trends and some dividend to boot.

But in case you’re still looking for market outperformers, here are a few that have really picked up in the past week. Take a look here-

Norfolk, VA-based based Condor Hospitality Trust is a self-administered real estate investment trust specializing in the investment and ownership of upper midscale and upscale, premium-branded select-service, extended-stay and limited-service hotels in the top 100 Metropolitan Statistical Areas, particularly the top 20.

Condor's hotels are franchised by a number of the industry's most well-regarded brand families including Hilton, Marriott and InterContinental Hotels. It currently owns 15 hotels in 8 states.

On Thursday, the company entered into a deal with affiliates of Blackstone Real Estate Partners to sell its entire portfolio of hotels for $305 million. Since 60% of shareholders have already agreed to back the deal, there’s no chance of a reversal.

Blackstone is also not assuming any debt, so the amount to be paid to shareholders will be after meeting legal obligations and paying related costs and expenses. The Board has also approved the liquidation of the company pending shareholders’ approval.

The shares carry a Zacks Rank #2 (Buy). The company had reported very strong results as a reopening play with the lone analyst covering the name also enthusiastically raising estimates. And the double-digit projected revenue and earnings likely helped the company to clinch the deal. The shares are up 25.9% over the past week.

Corvus is developing mupadolimab as a therapeutic for oncology indications as well as infectious disease, including COVID-19. On Wednesday, the company released the results of a phase 3 clinical trial of the candidate on COVID 19. A group of 40 patients were administered mupadolimab at doses of 2mg/kg and 1mg/kg and compared to placebo.

The test was able to establish a dose response relationship on the endpoint of time to respiratory failure or death, with no reported adverse events. The 2mg/kg cohort was also shown to elicit antiviral response in all variants tested, including delta.

Richard A. Miller, M.D., co-founder, president and CEO of Corvus said, “Combined with the findings in our previous Phase 1 trial in 29 patients, we believe there is mounting evidence that mupadolimab could become a universal treatment for viral diseases, with the ability to address immune escape from variants. We plan to evaluate our next steps with mupadolimab for COVID-19 as we continue to analyze the trial data and explore partnership opportunities to continue its development as a therapeutic."

After three quarters of earnings misses, the #2 ranked company finally beat estimates in the last quarter. Analysts expect the loss per share to come down significantly in 2021 and again in 2022. The shares jumped 27.8% in the past week.

Chattanooga, TN-based Covenant Logistics Group offers a portfolio of transportation and logistics services through its subsidiaries. The company’s services include asset-based expedited, dedicated and irregular route truckload capacity, as well as asset-light warehousing, transportation management and freight brokerage. It also has a used equipment selling and leasing business.

Its customers include transportation companies, such as parcel freight forwarders, less-than-truckload carriers and third-party logistics providers, as well as traditional truckload customers like manufacturers, retailers, and food and beverage shippers. As of December 31, 2020, it operated 2,461 tractors and 5,647 trailers.

Zacks #1 (Strong Buy) ranked CVLG shares have been rising consistently over the past year and are up 97.1% year to date. Last week’s appreciation of 21.7% was a continuation of this trend and may have been spurred by a Cowen analyst raising the estimated price target on the basis of CVLG’s pricing power.

The trucking industry is seeing tremendous demand around now as manufacturers and traditional retailers respond to the reopening even as ecommerce related last-mile demand remains high. With drivers being in short supply, trucking companies are also capacity constrained. A combination of these factors is responsible for the pricing power.

And so we see that CVLG topped estimates at strong double-digit rates in each of the last two quarters. It is expected to grow revenue by 18.2% and earnings by 217.6% this year and there’s more growth slated for next year. Its estimates are also on an upward trajectory.

The economic recovery we are seeing has clearly been positive for the company going by the positive surprises it has been recording in each of the last four quarters, averaging 120.4%. 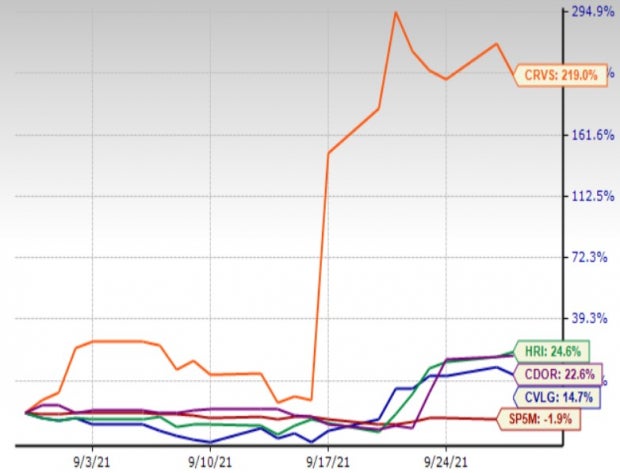 Here's Why You Should Retain Medtronic (MDT) Stock for Now