Papa John's International, Inc. (PZZA - Free Report) recently announced its collaboration with a Dallas-based franchisee operator — Sun Holdings — for the development of 100 new stores across Texas by 2029. Following the announcement, shares of the company moved up 2.5% during trading hours on Sep 29.

With respect to the collaboration, Amanda Clark, Papa John’s chief development officer, stated, “We’re excited to launch this milestone partnership with Guillermo and his team at Sun Holdings in Texas. Sun Holdings is a successful and well-financed operator who understands the Texas market and brings deep expertise within the QSR space that will benefit the entire Papa John’s system.”

Papa John’s is committed toward developing and maintaining a strong franchise system. In the first half of 2021, Papa John’s reported record net unit growth, as franchisees accelerate their opening plans for new locations within the current development pipeline. As of Jun 27, the company had a global restaurant count of 5,523, thereby operating in 49 countries and territories worldwide.

Going forward, the company plans to increase its international units, a large portion of which will be franchised. We believe that re-franchising a large chunk of the system reduces a company’s capital requirements as well as facilitates earnings per share growth and ROE expansion. Free cash flow continues to grow, which enables reinvestment for boosting brand recognition and shareholder return. 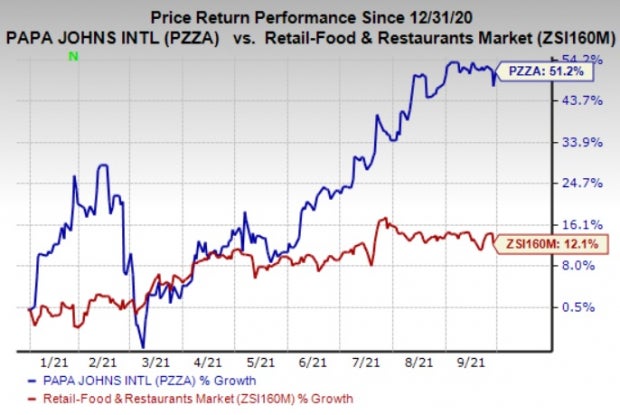 So far this year, shares of Papa John's have surged 51.2% compared with the industry’s 12.1% growth.

Wendys has a three-five year earnings per share growth rate of 14%.

Jack in the Box has a trailing four-quarter earnings surprise of 26.4%, on average.

Beyond Meat (BYND) to Launch Breakfast Sausage Links in Canada