Buy This Strong, Cheap Retail Stock Ahead of Q3 Earnings?

Levi Strauss & Co. (LEVI - Free Report) is set to release its third quarter fiscal 2021 financial results after the closing bell on Wednesday, October 6. The denim powerhouse’s stock is up big over the last year and its outlook is strong as it adapts to changing consumer habits.

Levi is an iconic maker of denim and even though jeans remain popular, the firm has been forced to expand beyond its original offerings in order to thrive. Chief executive Chip Bergh has said he projects half of Levi’s sales will come outside of denim bottoms over the next decade, up from just 11% in 2015 and 21% in 2020.

Lululemon (LULU - Free Report) , Nike (NKE - Free Report) , and others have helped change the way millions of people dress and inspired everyone from giants like Target (TGT - Free Report) to small upstarts to join in on the athleisure train. Levi has been able to roll out new offerings in order to capture some of the booming market and in early August it announced its planned purchase of Beyond Yoga.

The more diversified company is able to grow through multiple trends, which is key in the cyclical world of fashion. In fact, jeans could be on the rise again as economies reopen and people return to their normal lives. “We can confidently say that we're in the early innings of a new denim cycle… The strong results reflect an industrywide denim resurgence,” Levi’s CEO said on its second quarter earnings call. 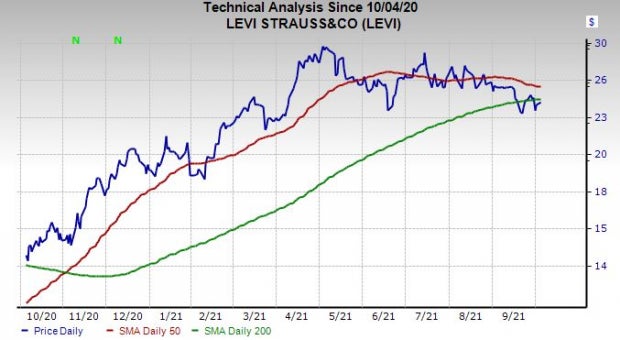 Speaking of, Levi’s second quarter revenue soared 156%, driven by wholesale and direct-to-consumer. It also swung from an adjusted loss of -$0.48 to +$0.23 a share. Looking ahead, Zacks estimates call for the company’s revenue to climb 29% in FY21 to reach its pre-pandemic total of $5.76 billion and then jump another 10% in FY22 to $6.3 billion.

At the bottom end of the income statement, Levi’s adjusted EPS are projected to soar 538% to $1.34 a share this year, with FY22 set to pop 11% higher. The company has crushed our earnings estimates by an average of 92% in the trailing four quarters and its positive EPS revisions help LEVI land a Zacks Rank #2 (Buy) right now.

Despite global supply chain worries and rising prices, retailers appear to be on solid footing heading into the holiday shopping season. LEVI is part of the Retail-Apparel and Shoes space that sits in the top 18% of over 250 Zacks industries and includes the likes of Gap Inc (GPS - Free Report) and others. Plus, Wall Street is high on the stock, with five of the six brokerage recommendations Zacks has at “Strong Buys” with the other at a “Buy.”

LEVI shares are up 70% in the past year to blow away its industry and easily surpass the S&P 500’s 30% climb. The stock has cooled down and it’s trading 15% below its early May records at around $25.20 a share at the close of regular trading Monday—it popped as the market dropped.

Levi stock offers solid value compared to its sector and it trades nears its own year-long lows at 17.1X forward 12-month earnings. The company also pays a dividend, with a 1.28% yield that roughly matches the S&P 500.

Investors might want to consider low-priced Levi stock as both a longer-term play and a way to benefit from the economic reopening and holiday shopping, despite lingering delta variant worries.

Buy These 2 Tech Stocks Before Q3 Earnings for Long-Term Growth?