With the rise of ESG (Environmental, Social and Governance) investing and the broad-based transition toward clean energy, Chevron (CVX - Free Report) became the latest oil biggie to set long-term climate goals after committing to becoming carbon neutral over the next three decades.

Carbon neutrality, also termed net zero, refers to a situation wherein all carbon (and other greenhouse gas, or GHG) emissions are offset by absorbing the same from the atmosphere. It is considered an important yardstick by climate scientists to ensure that global warming is limited to 1.5°C above pre-industrial levels by 2050, in sync with the Paris Climate Agreement.

Chevron Aims for Net-Zero Emissions by 2050

Working to catch up with the other supermajors (especially the European ones), Chevron recently said that it “aspired” to achieve net-zero greenhouse gas emissions in its operations by 2050. The company’s climate goal covers carbon emissions directly generated from its operations (Scope 1) and indirect emissions caused by the electricity consumption to run its facilities (Scope 2).

In the shorter term, Chevron pledged to cut carbon intensity by 5% within 2028 relative to 2016, including emissions from the combustion of fuel (such as jet fuel and gasoline) it sells to end-users. These are the hard-to-address Scope 3 emissions that typically constitute more than 90% of an oil and gas holding’s total footprint. Earlier this year, 61% of Chevron shareholders voted in favor of a proposal asking the company to substantially cut Scope 3 emissions.

Of late, the concept has gained traction operationally, with companies across a diverse spectrum laying out concrete strategies about their future sustainability endeavours. For the energy operators in particular, the pressure to decarbonize has been intensified by institutional investors and major clients committing to an ESG agenda and consequently snubbing carbon emitters.

As of now, it is difficult to ascertain how much of this is hype and how much actual change will occur as this complex evolution involves a monumental shift in the energy sector’s business model by effectively moving away from their primary operations of oil and gas development.

While some of the transition strategies are very ambitious, what’s clear is that companies with a strong ESG bent are held in high regard by the public that might ultimately boost the stock price.

Chevron’s move to eliminate carbon intensity builds on its pledge last month wherein it said that it will invest 200% more in lower-carbon businesses in the next seven years. The supermajor set clear targets to ramp up renewable natural gas output to 40,000 million British thermal units (MMBtu) per day by 2030, while growing hydrogen production to 150,000 tons annually. Besides, the No. 2 energy company in the United States behind ExxonMobil (XOM - Free Report) is rapidly expanding its renewable fuels footprint with daily production capacity estimated to reach 100,000 barrels by the end of this decade, in addition to increasing carbon offsets to 25 million tons per year.

As part of this plan, the Zacks Rank #1 (Strong Buy) American energy giant will invest $10 billion in clean energy through 2028, more than triple the $3 billion earmarked earlier. Of the total, an outlay of $3 billion each will be spent on renewable fuels and carbon capture/storage/offsets, $2 billion on hydrogen, with $2 billion planned to reduce the emissions intensity of the company’s portfolio.

All said and done, Chevron has been a laggard compared to its cousins across the Atlantic to jump into the net-zero bandwagon. Therefore, it will have a lot of catching up to do with the likes of Repsol (REPYY - Free Report) , Equinor (EQNR - Free Report) and BP among others, to neutralize all GHG emissions by the middle of this century. But for now, Chevron’s net-zero commitment provides optimism to investors.

While the Chevron stock has largely underperformed the industry year to date (+35% versus +50.3%), we believe that the company is trending toward the right direction, which will help its shares to catch up. 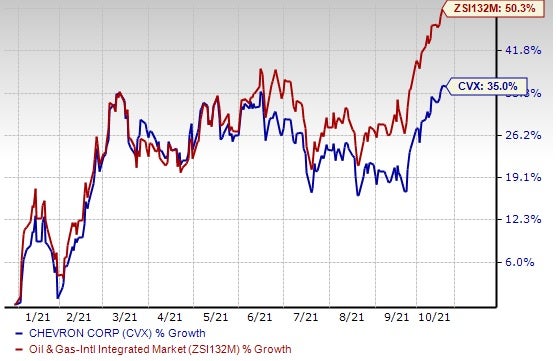 5 Finance Stocks to Buy Ahead of Q3 Earnings This Month