The approval of Biktarvy for children weighing at least 14 kg is based on data from Cohort 3 of phase II/III open-label, single-arm study. Data from the study showed that Biktarvy low-dose tablets were effective and generally well-tolerated through 24 weeks in virologically suppressed children living with HIV-1. Cohort 3 enrolled 22 participants weighing ≥14 to <25 kg who continued on treatment for 48 weeks and could then continue to receive study drug through an extension phase.

The FDA approved Biktarvy as a once-daily single-tablet regimen for the treatment of HIV-1 infection in adults in 2018. Thereafter, in June 2019, the FDA approved labeling revisions to Biktarvy, expanding the patient population to include pediatric patients weighing at least 25 kg.

Label expansion of the treatment will boost sales of the same, which came in at $3.8 billion in the first half of 2021. 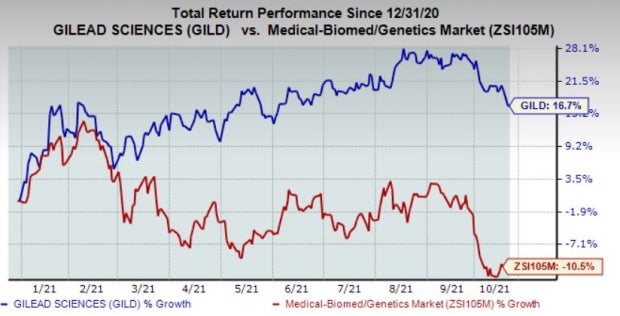 Gilead is looking to strengthen its HIV franchise, which was adversely impacted by the ongoing pandemic and the loss of exclusivity of Truvada and Atripla. Competition is stiff as well from the likes of GlaxoSmithKline (GSK - Free Report) .  Gilead has collaborated with a subsidiary of Merck (MRK - Free Report) to develop and commercialize long-acting, investigational treatment combinations of Gilead’s lenacapavir and Merck’s islatravir in HIV.

The massive decline in its HCV business has forced Gilead to focus on its HIV franchise and diversify into the oncology space, which promises potential despite stiff competition.

Allegion (ALLE) to Report Q3 Earnings: What's in the Offing?