A number of tech companies that are dependent on the data collected to serve targeted ads have been impacted by Apple’s (AAPL - Free Report) decision to make this a users’ choice.

In August, Peter Farago, Vice President of Flurry noted that 81% of iOS users worldwide had already upgraded to iOS14.5+, meaning that developers had to seek specific permission from these users before tracking them beyond their app usage.

Flurry analytics shows that opt-in rates remain abysmally low (25% worldwide and 17% in the U.S.) among those users that have received opt-in prompts. Plus, nearly a third of all users (3% of U.S. users) have tracking turned off altogether, so they won’t receive opt-in prompts at all.

So users appear to be taking their privacy seriously, leaving companies to develop alternative methods of creating useful insights for advertisers. In the meantime, investors in companies like Snap (SNAP - Free Report) , Pinterest (PIN - Free Report) and Facebook – the most vocal of Apple’s critics – are getting the jitters.

Snap’s earnings report last week only did further damage. Not so much the overall earnings numbers, which were stellar at 17 cents a share, compared to the 6 cents expected but more on account of the 2% miss on the top line. Investors largely ignored the 57% revenue increase, focusing instead on the iOS platform policy changes, the macro uncertainties that are impacting its advertising partners, supply chain disruptions and labor shortages that management called out, pulling down the shares by over 27%.

Facebook’s earnings results weren’t that great either, as the company missed by a sliver on the top line while the bottom line beat was by just a  couple of cents. The company has been focused on increasing user engagement by adding more activity to the core platform, including video creation, sharing and monetization tools; shopping; business messaging on WhatsApp and Messenger, payments processing and Oculus Quest. The increased engagement will therefore translate into increased returns for Facebook and its advertiser/seller partners.

The company is part of industry-wide collaboration efforts to drive value to advertisers, given Apple’s privatization efforts and the fourth quarter is expected to be severely impacted by it. If any company can deal with these issues, it’s Facebook, because it certainly has the fire power that some of these younger players may not. But then, it also has more headaches in the form of whistle blowers and regulatory scrutiny.

Pinterest shares have moved up and then down, largely because merger talks with PayPal (PYPL - Free Report) weren’t supported by PayPal shareholders, leading the company to state that such an acquisition was not being considered “at this time.” The deal would have fetched PINS shareholders $40-45 billion, or $70 a share, so you can see why the price reaction was significant.

Media reports from Bloomberg, CNBC, Reuters and others stated earlier that the deal would combine a very successful visual search engine and social media platform with recently-acquired commerce objectives (through a deal with Shopify) and a global payments platform that wants to be much more through its recently-launched super app. PayPal intends to bring high-yield savings accounts, check-cashing services, bill payment, digital wallets, peer-to-peer payments, stock-investing capabilities shopping tools (from its acquisition of Honey), crypto currency services and more. So the acquisition was expected to create a giant akin to the China’s WeChat.

But PINS isn’t a pushover even on its own, continuing to see increasing engagement from mobile users of its app, while absorbing some softness in web users as people move outdoors again. Core investments in shopping, automation and tools to drive long-term value continue, and management remains optimistic that its prized user base (Gen-Z) remains its fastest-growing audience. So near-term challenges are more likely to create opportunities to buy. The company is expected to report on Nov 4.

The interesting thing is that despite the Apple issue, analyst estimates are not coming down for any of these companies. In fact, they’re moving up, although likely by smaller percentages than they otherwise would have. So unlike investors, analysts appear less concerned about this issue.

We are looking at high-double-digit or triple-digit earnings growth for all three on top of strong double-digit revenue growth this year, as well as next year. So this is a very exciting place to be in. Valuations are high, as is usual for tech stocks, although all three are undervalued based on their own performances over the past year. 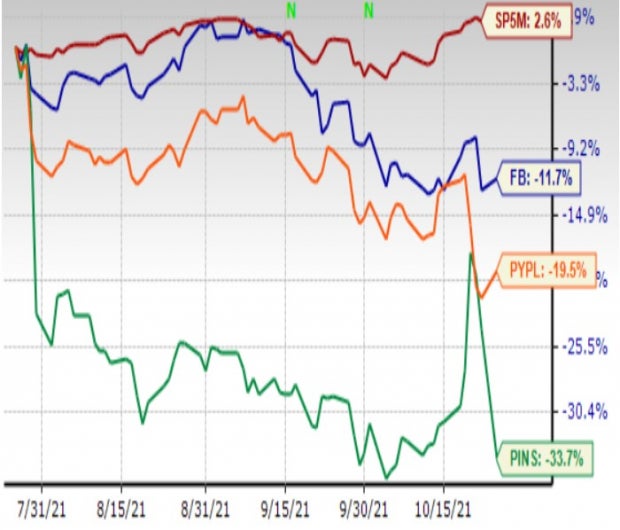