The company delivered an earnings surprise of 17.35%, on average, in the trailing four quarters, beating estimates all through. In the last reported quarter, A. O. Smith posted earnings of 73 cents, which beat the Zacks Consensus Estimate of 65 cents by 12.31%. 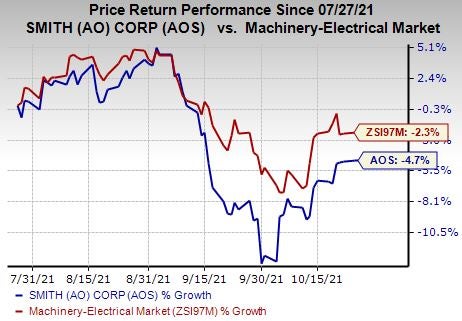 In the past three months, the company’s shares have lost 4.7% compared with the industry’s decline of 2.3%.

In the third quarter, A. O. Smith is likely to have benefited from strength in its Water-Right business, which has enhanced its foothold in the water treatment industry. The company’s acquisition of Master Water Conditioning Corporation (July 2021) is also expected to have supported the performance of its water treatment business in North America.

Strong demand for the company’s water heaters, boilers, and water treatment products in North America, supported by its strong retail and direct-to-consumer sales channel is expected to have augmented its top line in the third quarter. Growth in demand for the company’s major product lines in China and India is likely to have supported the Rest of World segment’s performance.

Despite improvement in the demand environment across the end markets, supply chain issues and disruptions in A. O. Smith’s distribution channel are likely to have dragged its performance. Also, inflation in prices of steel, high logistics costs and shortage of skilled labor might have affected its margins and profitability in the to-be-reported quarter. However, the company is anticipated to have gained from its focus on production efficiency and strong price management capabilities.

Escalating cost of sales and operating expenses have been a concern for A. O. Smith. In the second quarter, its cost of sales rose 29.3% year over year and its selling, general and administrative expenses jumped 11%. Also, it expects to incur capital expenditure of $85-$90 million for 2021. High costs might have adversely impacted its margin and profitability in the third quarter.

The Zacks Consensus Estimate for revenues from A. O. Smith's North America segment is currently pegged at $604 million, indicating no change sequentially but 11% growth from the year-ago reported figure. The consensus estimate for revenues from the Rest of the World stands at $240 million, indicating 8.7% decline sequentially but an 8.6% increase year over year.

According to our quantitative model, a stock needs to have the combination of a positive Earnings ESP and a Zacks Rank #1 (Strong Buy), 2 (Buy) or at least 3 (Hold) to increase the odds of an earnings beat.

Earnings ESP: A. O. Smith has an Earnings ESP of +2.49% as the Most Accurate Estimate is pegged at 69 cents, higher than the Zacks Consensus Estimate of 67 cents.

Columbus McKinnon Corporation (CMCO - Free Report) has an Earnings ESP of +5.26% and a Zacks Rank of 2, at present. You can see the complete list of today’s Zacks #1 Rank stocks here.

The Middleby Corporation (MIDD - Free Report) has an Earnings ESP of +1.54% and a Zacks Rank of 3 at present.