In a recent development, the company has acquired a 75% stake in PetDine in a bid to enhance its growing pet business. It also sold the Peoria ethanol complex, signed a MoU with Gevo to produce sustainable aviation fuel, and collaborated with LG Chem for the production of plant-based solutions.

Shares of this Zacks Rank #2 (Buy) company have gained 14.7% in the past three months compared with the industry’s 2.4% growth. 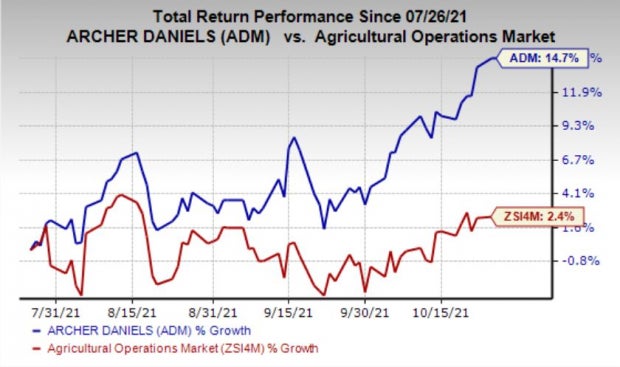 Adjusted earnings of 97 cents per share in the third quarter outpaced the Zacks Consensus Estimate of 91 cents. The figure also grew 9% from 89 cents in the year-ago quarter. On a reported basis, the company’s earnings were 93 cents per share, up more than two-folds from the prior-year quarter’s 40 cents.

Revenues rallied 34.5% year over year to $20,340 million and surpassed the Zacks Consensus Estimate of $17,558 million. Solid sales across the majority of the segments contributed to the top line.

The crushing business has witnessed significant year-over-year growth, driven by robust margins and solid demand for vegetable oil and higher production of renewable diesel. Positive timing impacts of nearly $70 million also aided results. Operating results for Refined Products and Other improved year over year on the back of strength in EMEA and North America biodiesel, favorable timing effects of $80 million, healthy demand for renewable diesel, and improved foodservice in North America.

In the Nutrition segment, the adjusted operating profit of $176 million grew 19.7% from $147 million in the year-ago quarter. Human Nutrition unit gained from better volume and favorable product mix along with strength in beverage, which drove Flavors results in EMEA and North America. Solid demand for alternative proteins contributed to the Specialty Ingredients category. The Health & Wellness unit also witnessed robust quarterly growth, particularly in bioactives and fiber.

The animal nutrition unit grew more than two-folds year over year, driven by strength in amino acids as well as feed additives and ingredients, which somewhat offset elevated costs in LATAM and slower demand recovery in the APAC region.

Archer Daniels ended the quarter with cash and cash equivalents of $1,083 million; long-term debt, including current maturities, of $8,620 million; and shareholders’ equity of $21,990 million.

In the nine months ending Sep 30, 2021, the company provided $5,853 million in cash for operating activities. It also paid out dividends of $626 million in the said period.

Helen of Troy (HELE - Free Report) currently has an expected long-term earnings growth rate of 8% and a Zacks Rank #2.

Clearway (CWEN) to Sell Thermal Business to KKR for $1.9B