A Big Day for Tech Earnings

We generally think of the big tech names as growth stocks, and they are, going by the way they continue grow year upon year. But when big tech is relatively undervalued, it’s a really great time to invest. Because this segment really offers the quality of earnings that value investors are looking for.

The best thing about tech is the way it helps increase efficiencies across other sectors, meaning that it doesn’t just grow because of dynamics within the industry but also as a result of overall economic growth across industries. And that is why I have always been in favor of a tech weighting in the portfolio.

This quarter, it was Microsoft’s Nadella that also mentioned how tech tends to be “deflationary”: “Digital technology is a deflationary force in an inflationary economy. Businesses – small and large – can improve productivity and the affordability of their products and services by building tech intensity.” The idea being that since technology helps increase efficiencies, you would need less of the more expensive resources (because of inflation), so you wouldn’t need to pass on these costs to the consumer.

Another factor that’s often overlooked is the fact that tech companies tend to return a ton of cash to investors. Not all tech companies will pay dividends of course, since there is tremendous scope for higher returns by reinvesting the cash in the business.

But almost all tech companies buy back a lot of shares. That’s because they tend to hire more engineering talent that’s often paid with stock-based compensation. Since this increases the share count, most tech companies regularly buy back a ton of shares.

So there are many good reasons to invest in tech, especially the big ones that just reported earnings results-

Strength was broad-based across segments and product lines: the largest segment Intelligent Cloud grew 31% with the server side jumping 35% and Azure and other services up 50%; Productivity and Business Processes grew 22% with office commercial and consumer both up double-digits, LinkedIn up 42% and Dynamics up 31%; More Personal Computing increased 12% with the Windows side growing low double-digits, search and advertising up 40%, Xbox content and services a seasonally soft 2% while the Surface category declined.

The results display the success of the company’s cloud strategy, its clout at legacy customers who are leveraging its hybrid system to jump to the cloud, the continued strength in digitization even as markets open up, a strong job market that’s pushing LinkedIn revenue, the platform approach that continues to pull more users into its productivity ecosystem and strong AI tools that helps it create more sticky platforms and sell ads.

The Zacks Rank #2 (Buy) company looks very strong and well positioned to make the most of ongoing digitization and other trends with growth rates likely to remain elevated as it continues to take share in the cloud.

The company’s 45% cloud revenue growth was almost as strong as Microsoft’s, albeit off a much smaller base. Alphabet continues to add to its capabilities and since this is a very big opportunity with not necessarily a single winner, we should expect continued growth here.

The company’s bread and butter is of course search advertising, which remains robust as some areas of the economy (like travel and retail) that were hit by the pandemic last year comes back online. Apple’s privacy initiative has impacted the quarter’s results, but there are many other offsetting factors, not the least of which is the fact that some ad spending likely moved to more easily measurable Google platforms from Apple platforms.

Even YouTube, which is particularly susceptible to Apple’s changes, grew 43% on the year on the back of more than 50 million music and premium subscribers. That has to count for something!

The Zacks Rank #2 company grows like a youngster but spills cash like a granddaddy. That situation is unlikely to change at any time in the foreseeable future.

AMD’s revenue beat the Zacks Consensus Estimate by 4.7% while its earnings beat by 10.6%.

It was a stupendous quarter from AMD, which grew revenue 54% (the fifth quarter in a row of 50%+ increases), gross profit 70%, operating income 111% and EPS 134%. Both reporting segments grew strong double-digits: Computing and Graphics up 44% and the slightly smaller Enterprise, embedded, and semi-custom segment up 69%. Data center sales more than doubled.

The Zacks Rank #2 company should continue growing strongly as it enjoys a design edge that it wrested from Intel, and that is very hard to outdo in a few years’ time. So it’s easy to see why revenue growth guidance for the year was raised from 60% to 65% with gross margin remaining at the 48% level reached in Q3.

Other tech companies that also reported yesterday were-

#2 ranked Teradyne, Inc. (TER - Free Report) , which reported an earnings beat of 9.7% on revenue that was essentially in line with the Zacks Consensus Estimate.

#3 (Hold) ranked F5 Networks, Inc. (FFIV - Free Report) , which reported revenue that exceeded the Zacks Consensus Estimate by about 1.2% while earnings beat by 8.7%.

NCR Corp. (NCR - Free Report) was another #3 ranked company with a mixed quarter. Its earnings beat of 4.6% came on revenue that missed by 4.8%.

Twitter (TWTR - Free Report) is perhaps the hottest of the #3 ranked tech stocks that reported an unexciting quarter. The social media company that prefers the Taliban to Trump missed earnings by 417.7% on revenue that missed by 0.3%. 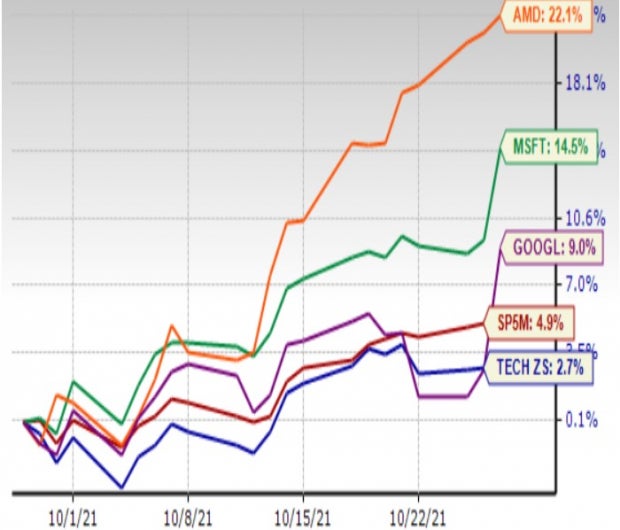 Matson (MATX) to Report Q3 Earnings: What's in the Offing?