3 Great Stocks to Buy at Big Discounts in November

The S&P 500, the Nasdaq, and the Dow all hit records during the last week of October. The resilient and always forward-looking market shrugged off slow Q3 GDP growth and other concerns in favor of the positives.

The improving earnings picture includes everyone from Microsoft (MSFT - Free Report) to Ford (F - Free Report) . The S&P 500 margins outlook also remains strong for 2022 and beyond, despite rising pricing and supply chain bottlenecks.

Plus, the consumer-driven U.S. economy flashed comeback signs in the first month of the fourth quarter, from hotel occupancy to restaurant dining. And consumer confidence increased in October, after three months of declines.

The bullish outlook is further supported by low interest rates that will continue to favor stocks for the foreseeable future. That said, some big names and the broader market could face a near-term pullback after the October run, with the Nasdaq 100-tracking QQQ ETF currently on the cusp of overbought technical levels.

Therefore, investors might want to turn their attention to strong stocks still trading well below their highs heading into November…

Covid temporarily crushed Disney’s parks and theatrical businesses. The entertainment titan’s parks and resorts from Disney World in Orlando to Shanghai Disney Resort are now open. On top of that, it began releasing movies again in the theaters, with comparatively strong showings given the circumstances. Newer releases such as Shang-Chi and the Legend of the Ten Rings have performed well at the box office and more and more people are poised to venture back to the theaters in 2022.

Disney’s Star Wars and Marvel movies dominated theaters before the pandemic and they likely will going forward. Yet its new crown jewel is its booming streaming TV business, which it bolstered with its Fox deal and Hulu ownership. Disney’s streaming offerings include Disney+, Hulu, and ESPN+. These are also available in a bundle that’s very competitively priced compared to Netflix (NFLX - Free Report) .

Disney+ (launched in November 2019) has already amassed roughly 115 million subscribers to blow away its own guidance. The entertainment conglomerate initially put out a goal of 60 to 90 million by 2024 and it now expects to hit 230 to 260 million by then. And it has around 175 million subscriptions across Disney+, ESPN+ and Hulu—NFLX closed Q3 with 214 million. 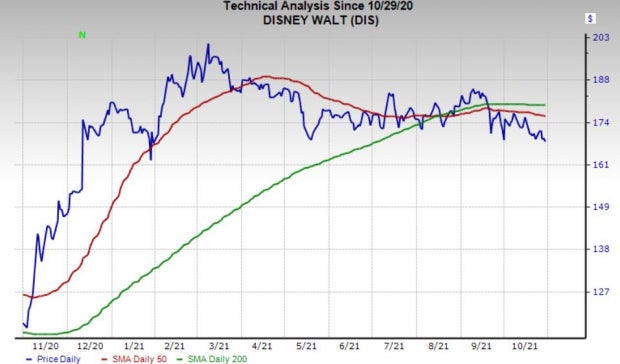 Even with the tough conditions, DIS revenue only slipped 6% last year. Zacks estimates call for its FY21 (period ended in early October) revenue to pop 3.5%, with 2022 projected to soar 25% to crush its pre-covid totals by $16 billion at $84.78 billion. Meanwhile, its adjusted earnings are expected to jump 22% and 106%, respectively. Disney lands a Zacks Rank #3 (Hold) right now and it’s crushed our EPS estimates by an average of 114% in the trailing four quarters.

Disney stock soared on the back of strong streaming numbers and the reopening of its parks, with it up 45% since last August. This run includes a 6% decline in 2021 as Wall Street took profits and allowed its valuation to cool down a bit. Disney is now trading 15% below its records and at a 50% discount to its year-long highs at 32.6X forward earnings.

Disney does sit below both its 50-day and 200-day moving averages, but it has plenty of runway in both the near and long-term. Wall Street is also very bullish on the stock, with 13 of the 16 brokerage recommendations that Zacks has coming in at “Strong Buys” or “Buys.”  And its current Zacks consensus price target marks 23% upside right now, with its Q4 FY21 results due out on Wednesday, November 10.

Roku’s streaming TV devices gained impressive market share in the player space that features Amazon (AMZN - Free Report) and others. Its tech is also built into some smart TVs and it was the No. 1 smart TV OS sold in the U.S. in 2020, having captured nearly 40% of the market. Roku’s hardware business continues to generate solid revenue. But its booming digital advertising segment made it a Wall Street standout. Roku’s ad-focused platform revenue accounted for over 80% of total Q2 sales and 71% in 2020, while growing at a much faster clip.

Roku allows marketers and companies to buy targeted ads, promote their streaming movies, shows, platforms, and whatever else they are selling. The company boosted its advertising bona fides through acquisitions as well, including Nielsen’s Advanced Video Advertising business, and it announced a partnership with Shopify (SHOP - Free Report) in late September. The company is set to thrive as the majority of ad dollars shift to digital and companies pay to find people as they pay to avoid ads where they can.

On top of that, Roku ramped up its spending to roll out more content, including some original programming on its own ad-based Roku Channel that allows users to watch free, ad-supported streaming movies and TV shows. Plus, the company is expanding its international reach outside of the U.S. and Canada. 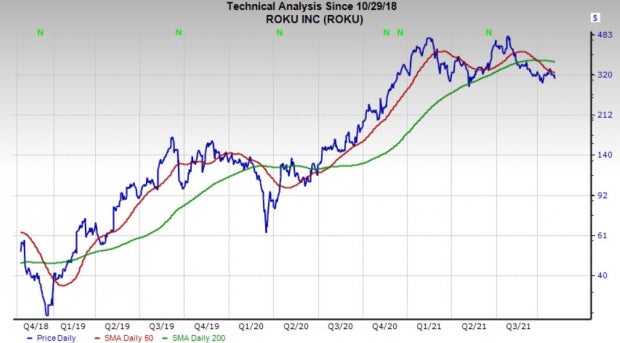 Roku shares have skyrocketed 500% in the last three years, including a market-beating 50% run in the trailing 12 months. The streaming TV firm has gone on a wild up and down ride in 2021 and it’s now down 35% from its late-July records. Some of the selling came on the back of a margins crunch for its devices and a sequential slowdown in streaming hours. But those are more near-term concerns and streaming TV is the future of entertainment.

Wall Street is extremely bullish on Roku, with 16 of the 18 brokerage recommendations Zacks has at “Strong Buys.” Its current Zacks consensus price target sits at $461 a share, with Roku hovering around $305 at the close on Friday. And it’s somewhat close to oversold RSI levels (30 or under) at 37, while many tech stocks are back above or near overbought. Therefore, investors might want to keep their eye on Roku with its Q3 financial results due out on November 3.

TJX is an off-price apparel and home décor retailer that operates roughly 4,665 stores in nine countries, including the U.S., Canada, the UK, and Germany. The company operates under T.J. Maxx, Marshalls, and HomeGoods, as well as the much smaller Sierra and Homesense brands. The company had found success in both in-store retail and through the expansion of its digital and e-commerce offerings.

TJX has carved out a strong niche within a rapidly evolving traditional retail landscape that has seen the likes of Kohl's (KSS - Free Report) and Macy’s (M - Free Report) struggle as shoppers gravitate to Target (TGT - Free Report) , Amazon, and other e-commerce sites such as Esty (ETSY - Free Report) .

The pandemic crushed TJX, with revenue down 23% in 2020. Luckily, its stores are reopened, though some were closed during parts of the second quarter mostly in Canada, Europe, and Australia. Despite some lingering setbacks, shoppers have rushed back to their favorite TJX locations and spent heavily online. And let’s not forget that U.S. consumers are poised to spend big this holiday season.

Zacks estimates call for its current-year (FY22) revenue to climb 50% to $48.18 billion to blow away its pre-pandemic total of $41.71 billion. Its sales are then projected to climb another 7% higher next year. Plus, its adjusted earnings are projected to skyrocket from $0.31 a share in the year-ago quarter to $2.99 a share, with next year set to jump over 15% higher.

TJX’s long-term earnings revisions have trended in the right direction to help it land a Zacks Rank #2 (Buy) at the moment. The company has also blown away our EPS estimates in three out of the last four quarters. On top of that, 13 of the 15 brokerage recommendations Zacks has are “Strong Buys.” TJX also grabs an “A” grade for Growth in our Style Scores system and its 1.6% dividend yield just outpaces Walmart (WMT - Free Report) and the 10-year U.S. Treasury.

TJX shares are up 80% in the last five years and they outpaced the market over the past decade. The company was on a nice run in the last year until it started to fall from its records at the end of August. TJX currently trades over 10% below its highs and it rests below neutral RSI levels.

Plus, it trades at six-month lows in terms of forward earnings at 19.6X, which also marks a discount to its industry’s 24.6X average. And a recent comeback has it moving back up toward its 200-day moving average, with it set to release its quarterly results in mid-November.

Buy These 3 Blue-Chip Tech Stocks with the Market at New Highs?