Moreover, analysts are bullish about the stock. The Zacks Consensus Estimate for the company’s current-year earnings has been revised 1.5% upward over the past 30 days.

However, margin pressure and elevated expenses (primarily due to investments in franchise) are major concerns, which might hamper the company’s profitability. Thus, Hilltop Holdings currently carries a Zacks Rank #3 (Hold). You can see the complete list of today’s Zacks #1 Rank (Strong Buy) stocks here.

Over the past six months, shares of the company have gained 5% compared with 6.1% growth recorded by the industry. 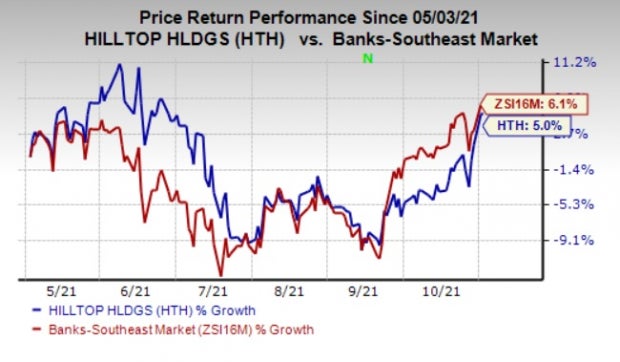 Looking at fundamentals, the company’s net interest income (NII) has registered a compound annual growth rate (CAGR) of 1.6% over the past five years (2016-2020). The rise was partly driven by acquisitions completed during that period. The upward momentum continued in the first nine months of 2021.

Further, similar to many other banks like Associated Banc-Corp (ASB - Free Report) , Northwest Bancshares, Inc. (NWBI - Free Report) and PacWest Bancorp (PACW - Free Report) , Hilltop Holdings’ restructuring efforts are commendable. In 2020, the bank divested its insurance division — National Lloyds Corporation. Since the buyout of PlainsCapital in 2012, the company’s business has expanded tremendously through acquisitions, with the consolidation of its position in Texas, Oklahoma, Georgia, Tennessee and Arizona. The deals are not only accretive to earnings but have also helped the company diversify its operations from core Property & Casualty insurance to a profitable banking operation.

Supported by a strong capital and liquidity position, the company is expected to keep boosting shareholder value through sustainable capital deployment activities.

Hilltop Holdings’ non-interest expenses witnessed a six-year (2015-2020) CAGR of 1.6% mainly due to higher compensation and benefits costs, with the uptrend continuing in the first three quarters of 2021. Given the company’s steady investments in franchise, continued hiring and inorganic growth plans, overall expenses are expected to remain elevated.

What's in the Offing for Magnite (MGNI) This Earnings Season?