1. Cummins Inc. (CMI - Free Report) reported third-quarter 2021 earnings of $3.61 per share, which increased from $3.57 recorded in the year-ago period but lagged the Zacks Consensus Estimate of $3.99. Revenues increased 16.6% year over year to $5,968 million. The reported figure, however, fell short of the Zacks Consensus Estimate of $5,999 million.

Amid persistent supply chain disruptions and cost headwinds, Cummins has downwardly revised its full-year 2021 guidance. The revised top-line estimate indicates year-over-year growth of 20% versus the prior guided range of 20-24%. EBITDA is envisioned at 15% of sales, down from the previous forecast of 15.5-16% of sales.

3. Honda reported earnings of 88 cents per American Depositary Receipt for second-quarter fiscal 2022, surpassing the Zacks Consensus Estimate of 74 cents. The bottom line, however, declined from the year-ago earnings of $1.31 a share. Quarterly revenues totaled $30,925 million, missing the Zacks Consensus Estimate of $31,188 million. The top line also slid 6.7% year on year.

4. Magna (MGA - Free Report) reported third-quarter 2021 adjusted earnings of 56 cents per share, plummeting from $1.95 recorded in the year-ago period. The bottom line also missed the Zacks Consensus Estimate of 75 cents per share. For the reported quarter, net sales contracted 13.2% from the prior-year quarter to $7,919 million but topped the consensus mark of $7,849 million.

6. American Axle (AXL - Free Report) reported adjusted earnings of 15 cents per share for third-quarter 2021, beating the Zacks Consensus Estimate of 2 cents. The bottom line, however, slipped from the year-ago earnings of $1.15 a share. The company generated quarterly revenues of $1,213 million, surpassing the Zacks Consensus Estimate of $1,180 million but falling 14.4% on a year-over-year basis. 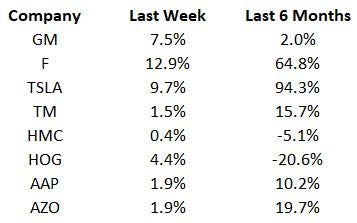 In the past six months, all stocks have increased, apart from Honda and Harley-Davidson. Tesla was the best performer, with shares up 94.3%. In the past week, all stocks rose, with Ford registering the maximum gains.

Industry watchers will track China vehicle sales data for October 2021, which is likely to be released by the China Association of Automobile Manufacturers this week. Automotive equipment providers Westport Fuel Systems and Adient plc are slated to report quarterly numbers this week. Also, stay tuned for updates on how automakers tackle the semiconductor shortage, and make changes in business outlook as well as operations.