Reata Pharmaceuticals Inc. (RETA - Free Report) reported third-quarter 2021 loss of $1.97 per share, narrower than the Zacks Consensus Estimate of a loss of $2.32.

However, the above loss included stock-based compensation and a non-cash interest expense. Adjusted loss for the quarter was $1.27 per share, narrower than $1.31 per share recorded in the year-ago period.

Shares of Reata were up 1.7% on Monday, following better-than-expected results. However, the company’s shares have declined 13.5% so far this year compared with the industry’s decrease of 12.5%. 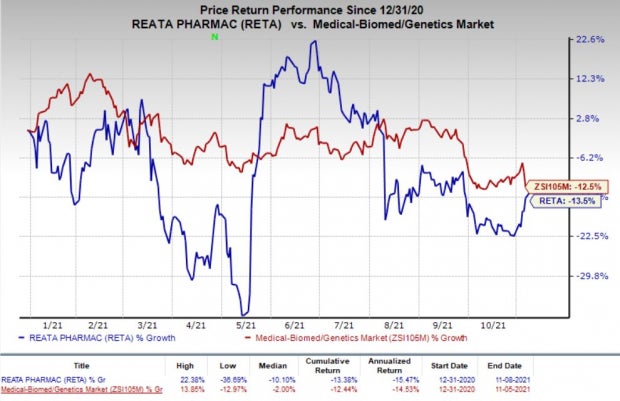 General and administrative expenses were $25.7 million, up 40.4% from the year-ago period due to increased commercial launch readiness activities and higher personnel costs.

In April, Reata’s new drug application (“NDA”) seeking approval for bardoxolone as a potential treatment for CKD caused by Alport syndrome was accepted by the FDA. An Advisory Committee meeting is scheduled on Dec 8 for discussing the NDA. A final decision from the FDA is expected by Feb 25, 2022. The company has also submitted a regulatory application in Europe seeking approval for bardoxolone for the same indication last month.

In September, Reata successfully completed a pre-NDA meeting with the FDA, discussing a planned NDA submission for another pipeline candidate, omaveloxolone. Following the meeting, the company is planning to submit an NDA for the same in the first quarter of 2022.

Reata is also developing bardoxolone for treating autosomal dominant polycystic kidney disease (“ADPKD”) in the phase III FALCON study. The company is currently preparing protocol amendments to the FALCON study. The primary endpoint now will be Year 2 off-treatment analysis. The company has decided not to unblind the study until after its completion. The study’s patient enrollment sample size will also be increased from 550 to 700 patients. The company expects to reach the increased enrollment target by mid-2022.

The candidate is also being evaluated in a phase II study (MERLIN) in patients with CKD at risk of rapid progression to end-stage kidney disease. Data from the study is expected in the first quarter of 2022.