A lawsuit has been filed against Franklin Resources, Inc. (BEN - Free Report) by a group of investors claiming that the company sabotaged a startup named Onsa to get its technology and, hence, an entry into the flourishing fintech market. The news was reported by Bloomberg.

Claims suggest that Onsa developed a “tokenized” money market, which could convert assets into digital tokens, being the first of its kind to be approved by the Securities and Exchange Commission.

But Franklin has been accused of breaching its fiduciary duty. Per the lawsuit, Franklin took over Onsa’s control through an investment. However, while Onsa had been assured that it would remain an independent company, Franklin misappropriated its technology and liquidated assets in a “pseudo-bankruptcy proceeding” that was developed to shield itself from the liabilities to non-Franklin shareholders.

Claims also suggest that Franklin abruptly removed top executives and coders at Onsa in 2020 and recruited some of them to begin its own version of the blockchain technology.

The group of Onsa shareholders (known as Blockchain Innovation LLC) claimed, “Franklin Templeton is now on the cusp of launching the technology it took from Onsa under the Franklin Templeton banner, hoping to change its image as a technological dinosaur and to generate enormous financial benefits that flow from Onsa’s innovative technology.”

But a Franklin spokeswoman considers the lawsuit to be “misguided.” She claimed that Franklin has heard of Blockchain Innovation LLC for the first time ever, “which appears to be an entity that exists solely to manufacture litigation against Franklin Templeton.”

She added that if the group had done any “reasonable diligence,” then the complaint would appear to lack merit.

But the group is of the opinion that Franklin ruined a business that could have been compared to blockchain companies that have recently gone public and achieved billion-dollar market valuations.

Hence, shareholders are seeking damages “likely in the billions of dollars” and a court order that does not allow Franklin to roll out its tokenized market fund or its “Benji” mobile application or web platform.

Franklin operates in a business and regulatory environment that is complex, uncertain and subject to change. Also, the company is subject to numerous regulations by the U.S. and non-U.S. regulators that add further complexity to the ongoing global compliance operations and, thereby, hurts profitability.

Over the past year, shares of Franklin have gained 66.4% compared with 31.4% growth recorded by the industry. 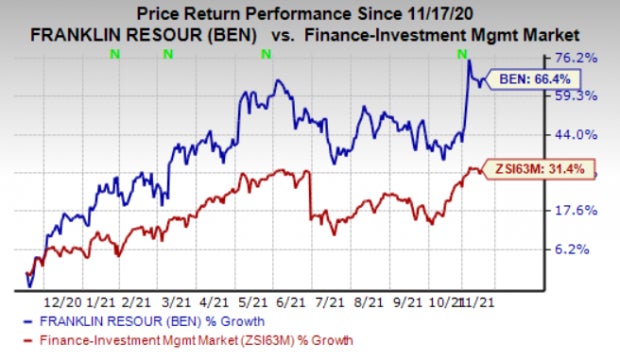 Several finance companies continue to encounter legal hassles and are charged with huge sums of money for business malpractices.

Last month, Washington Federal (WAFD - Free Report) agreed to pay a civil money penalty of $2.5 million to the Office of the Comptroller of the Currency (OCC) in relation to its February 2018 Consent Order for Anti-Money Laundering and Bank Secrecy Act (“AML/BSA”) deficiencies.

In April 2017, Washington Federal entered an agreement to acquire Anchor Bancorp in an all-stock transaction. That year, in September, the companies amended the merger’s termination date from Dec 31, 2017, to Jun 30, 2018, because of the identification of some faults with respect to procedures, systems and processes of Washington Federal’s BSA program. However, the deal was terminated on Jul 17, 2018.

Charles Schwab (SCHW - Free Report) was slapped with a class-action lawsuit over violations of its fiduciary duty by placing its interest before the protection of its clients through the bank’s robo-adviser Schwab Intelligent Portfolios’ cash sweep program.

The case, filed in the U.S. District Court in Northern California, also accused Schwab of breach of contract and the violation of state laws.

According to the order, the bank was also in non-conformity with certain security guidelines.