Cassava (SAVA) Down on Report of SEC Investigation Into AD Program

Shares of Cassava Sciences, Inc. (SAVA - Free Report) plunged 23.7% after an article was published in The Wall Street Journal, which reported that the Securities and Exchange Commission (“SEC”) is investigating allegations against the company.

The allegations relate to claims of manipulation of results by the company of its investigational candidate, simufilam for the treatment of Alzheimer's disease (AD).

Earlier in the week, in a SEC filing, Cassava stated that certain government agencies have asked it to provide them with corporate information and documents. The names of these agencies were not disclosed by the company.

We remind investors that Cassava has been embroiled in this controversy for the past few months.

In August 2021, Labaton Sucharow LLP, a law firm, submitted a Citizen Petition to the FDA requesting the FDA Commissioner to immediately halt the clinical development of simufilam for AD questioning the integrity of the studies on various grounds.

Per the petition, biomarker data is generated by Cassava or its science collaborators and therefore are falsified. Among others, it was also alleged that extensive use of Western blot analysis is foundational to Cassava’s research, and western blots data appear overexposed and highly processed, suggesting image manipulation.

Quanterix, a company digitizing biomarker analysis, stated that neither it nor its employees interpreted the test results or prepared the data charts presented by Cassava at the Alzheimer’s Association International Conference in July 2021 or otherwise.

The company also announced that it has reached an agreement with the FDA under a Special Protocol Assessment (SPA) for both of its pivotal phase III studies of oral simufilam for the treatment of patients with AD. 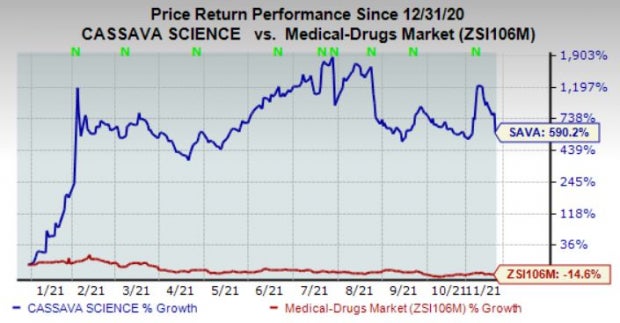 The FDA approval of Biogen’s (BIIB - Free Report) and Eisai’s AD drug, Aduhelm (aducanumab), in June 2021 has put the spotlight on AD treatments.  However, Biogen earlier mentioned that the launch of Aduhelm is facing some near-term challenges.

Biogen recently announced that it received a negative trend vote on the aducanumab Marketing Authorization Application     by the Committee for Medicinal Products for Human Use of the European Medicines Agency.

Given the rising cases and lack of treatments, quite a few companies have invested millions and billions of dollars to develop a treatment for the disease but most have failed.

Prothena Corporation (PRTA - Free Report) also has a portfolio of programs for the potential treatment of AD. PRX005 is an investigational antibody that targets tau, a protein implicated in diseases including AD, frontotemporal dementia, progressive supranuclear palsy, chronic traumatic encephalopathy, and other tauopathies.

Prothena is also evaluating PRX012, an investigational high-potency monoclonal antibody targeting a key epitope at the N-terminus of amyloid beta (Aβ) for the treatment of AD.  PRTA is also developing a dual Aβ-Tau vaccine — a potential prevention and treatment for AD.

5 Valuable Price-to-Book Stocks to Add to Your Portfolio