The Gap Inc. (GPS - Free Report) reported lower-than-expected top and bottom-line numbers for third-quarter fiscal 2021. Supply chain headwinds including factory closures and port congestion led to product delays, which made it difficult for the company to fulfill the strong customer demand. Lower inventory levels during the quarter hurt the top line. Management expects supply chain issues to persist in the days ahead. Nevertheless, it is progressing well with the Power Plan 2023 strategy.

For the fiscal third quarter, the company’s earnings of 27 cents per share missed the Zacks Consensus Estimate of 49 cents. Yet, the metric improved 8% from 25 cents per share in the year-ago quarter.

Net sales fell 1.3% year over year and 1.4% from the 2019 pre-COVID level to $3,943 million. The figure also lagged the Zacks Consensus Estimate of $4,453 million. This was mainly due to industry-wide supply chain issues.

Despite store openings, the company continued to witness strength in the online business, with digital sales increasing 48% from third-quarter fiscal 2019, accounting for 38% of total sales for the reported quarter.

Comparable sales (comps) advanced 5% from third-quarter fiscal 2019. Comps included online sales and the comparable sales days for stores that were open on the same days in both 2020 and 2019 comparable periods.

In the past three months, shares of this Zacks Rank #3 (Hold) company have declined 18.5% compared with the industry’s 8.8% fall. 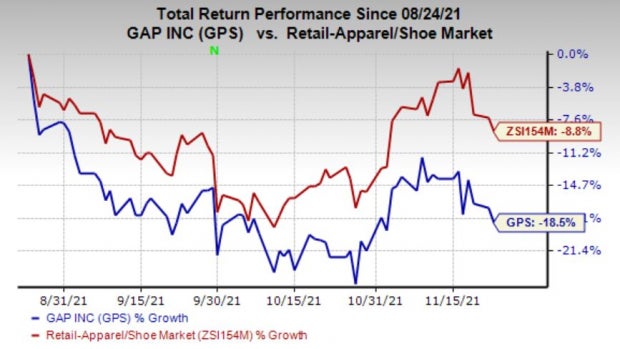 Gap Global: For third-quarter fiscal 2021, net sales declined 10% ona  two-year basis at Gap Global due to store closures. Comps for Gap Global rose 3% from third-quarter fiscal 2019 and 7% year over year. The Gap brand’s Partner to Amplify strategy, solid sales of its newly launched Yeezy Gap Hoodie, and expansion of its second home collection at Walmart.com to include furniture and rugs contributed to growth.

Banana Republic: Net sales declined 18% and comps were down 10% on a two-year basis. On a year-over-year basis, comps rose 28%. The relaunch of the Banana Republic brand in September along with an increased focus on enhancing customers’ shopping experience via improved products, omnichannel capabilities and marketing efforts act as growth drivers.

Athleta: Net sales improved 48% for the Athleta brand while comps increased 41% from the 2019 comparable period. Comps improved 2% on a year-over-year basis. Segment results gained from continued strength in activewear and the launch of its online fitness and wellness platform namely, Athleta. The launch of its Canadian online business, the first company-operated Canadian store in Vancouver and its second store in Toronto also bode well. It is making efforts to expand base internationally with franchise partnerships in Costa Rica and Europe.

Gross profit of $1,661 million reflected a 2.5% increase from $1,620 million in the prior-year quarter and improved 6.5% on a two-year basis. Adjusted gross margin of 41.9% expanded 430 basis points (bps) from third-quarter fiscal 2019, backed by a 290-bps improvement in leverage from lower rent and occupancy costs, stemming from online growth, store closures and negotiated rent.

Gap ended the fiscal third quarter with cash, cash equivalents, and short-term investments of $1,076 million, representing a significant decline from $2,649 million in the year-ago period. As of Oct 30, 2021, it had total stockholders’ equity of $2,787 million and long-term debt of $1,484 million.

For the nine months ended Oct 30, 2021, the company generated an adjusted free cash flow of $196 million. Gap bought back 2.9 million shares worth $73 million and approved a quarterly dividend of 12 cents during the quarter under review.

For fiscal 2021, the company anticipates a capital expenditure of $800 million.

Driven by drab quarterly results and the expectation of persistent supply chain woes, Gap slashed its view for fiscal 2021. It now envisions adjusted earnings of $1.25-$1.40, down from $2.10-$2.25 per share mentioned earlier. GAAP earnings per share are now expected to be 45-60 cents, down from the earlier mentioned $1.90-$2.05. The company expects an adjusted operating margin of 5%, down from 7% mentioned earlier.

Here's How Other Stocks Fared

Boot Barn Holdings — the lifestyle retailer of western and work-related footwear, apparel and accessories — sports a Zacks Rank #1 (Strong Buy). Shares of the company have rallied 48.5% in the past three months. You can see the complete list of today’s Zacks #1 Rank stocks here.

The Zacks Consensus Estimate for Boot Barn Holdings’ sales and earnings per share (EPS) for the current financial year suggests growth of 54.4% and 183.3%, respectively, from the year-ago period. BOOT has a trailing four-quarter earnings surprise of 35.3%, on average.

Tractor Supply Company, a rural lifestyle retailer in the United States, carries a Zacks Rank #1 at present. The company has a trailing four-quarter earnings surprise of 22.8%, on average. Shares of the company have gained 18.6% in the past three months.

The Zacks Consensus Estimate for Tractor Supply Company’s sales and EPS for the current financial year suggests growth of 19% and 23.9%, respectively, from the year-ago period. TSCO has an expected EPS growth rate of 9.6% for three-five years.

Costco, which operates membership warehouses, presently carries a Zacks Rank #3. The company has a trailing four-quarter earnings surprise of 7.7%, on average. Shares of Costco have gained 19.6% in the past three months.

The Zacks Consensus Estimate for Costco’s sales and EPS for the current financial year suggests growth of 9.6% and 9.7%, respectively, from the year-ago period. COST has an expected EPS growth rate of 8.7% for three-five years.