In the past week, news about the spread of the highly transmissible new COVID-19 variant (B.1.1529 strain) dominated headlines. First identified in South Africa, this new variant (Omicron) triggered fears of fresh travel curbs and dwindling air-travel demand. However, the two U.S. carriers, namely Delta Air Lines (DAL - Free Report) and United Airlines (UAL - Free Report) , with direct flights to South Africa, decided not to adjust their schedule to South Africa. European carrier Ryanair Holdings (RYAAY - Free Report) also decided against canceling flights in the wake of the new variant. An expansion-related update was also available from Ryanair in the past week.

Additionally, news on the alliance between American Airlines (AAL - Free Report) and JetBlue Airways (JBLU - Free Report) invited attention in the past week.

1 Following the detection of the new variant, the United States decided to suspend and restrict the entry of foreign nationals in the United States. However, the restriction will apply only to the passengers who visited South Africa, Namibia, Zimbabwe, Botswana, Lesotho, Mozambique, Malawi and Eswatini during a fortnight prior to their landing in the United States. However, Delta, which currently operates flights connecting Johannesburg with Atlanta (thrice a week), did not make any changes in its schedule as yet. We believe that DAL’s current stance may change if the Omicron variant becomes more deadly and is found in more countries across the globe.

2. United Airlines, like Delta, is also likely to be hit by the U.S. government’s travel restrictions stemming from the detection of the Omicron mutant. UAL, currently carrying a Zacks Rank #3 (Hold), operates non-stop flights connecting Johannesburg with Newark. UAL intends to start flights to Cape Town from today. Currently, UAL like DAL, did not have plans to tweak or trim the number of flights to South Africa due to the Omicron spread. However, any shift in the schedule cannot be ruled out in the coming days if the new strain worsens the situation at large.

3. Ryanair announced plans to open a new base in Madeira, Portugal during summer 2022. This new base will widen RYAAY’s connectivity, with 10 new routes linking Madeira with several European destinations, including mainland Portugal, throughout the year. With this, the carrier will offer more than 40 flights per week. The 10 new routes to Madeira, include Brussels Charleroi, Dublin, Lisbon, London Stansted Airport, Manchester, Marseille, Milan Bergamo, Nuremberg, Paris Beauvais and Porto.

4. Per a Reuters report, the trial proceedings related to the lawsuit filed in September on antitrust grounds by the Justice Department (DOJ) and the officials in six states against the alliance between Jetblue and American airlines will begin on Sep 26, 2022. The court case alleges that the collaboration, which is already in operation, induces higher fares at the busy Northeastern U.S. airports. Consequently, the lawsuit demanded an end to the alliance. 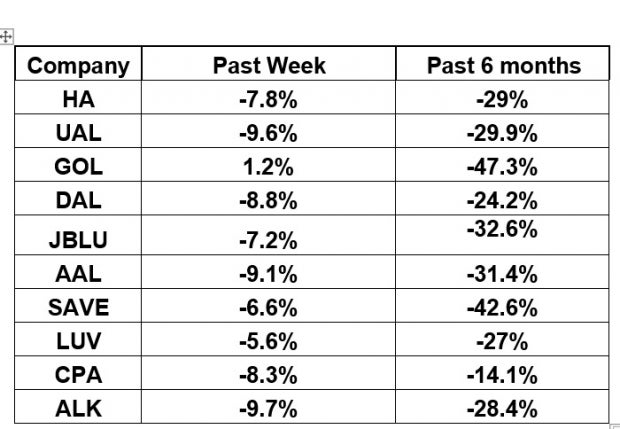 November traffic reports by some carriers are expected in the coming days.