The semiconductor shortage seems to be dragging on forever, and if we listen to experts, it’s going to continue for a while.

That’s because semiconductor fabrication plants (fabs) take 2-3 years to build, and then they have to be qualified and equipped before mass production can begin. Based on what we are hearing from market watchers, analysts and company management, the consumer/computing side is likely to come out of this sooner than the rest, especially the highly competitive, larger players like Apple and Samsung. In fact, they have been ordering above consumption for some time now so they don’t miss a design cycle and production schedules aren’t disturbed.

The capacity crunch is most pronounced in the auto market. Stockpiling really makes a bad situation worse because capacity earmarked for auto was already retooled and repurposed for consumer/computing when automakers cancelled orders back in 2020 in anticipation of protracted weakness in demand. As we all know, that didn’t play out according to expectations, with demand picking up strongly by the end of the year and continuing thereafter.

And for the most part, this capacity is typically in older fabs using older 40nm processes and smaller 200mm wafer sizes. Chip production technology has gone ahead however and today, this kind of production line doesn’t yield a good return on investment. So, chipmakers aren’t exactly racing to build these things.

This would seem to indicate that freeing up older capacity would be the solution to all these problems. But that’s easier said than done because the production lines are shared with less sexy but equally important components like analog and power management chips, display drivers, microcontrollers, sensors and so on, that go into a multitude of things.

When demand follows some logical pattern, chipmakers are able to make adjustments between components to meet it. But when we have some companies stockpiling some components, others grabbing what they can get and every producer using semiconductors asking for more, there’s a likely some inventory imbalance building up.

And this could be terrible for the semiconductor supply chain. Because production may have to be stalled on something like a washing machine if there is supply of sensors but not of microcontrollers (for example) since the washing machine uses both components.

It’s hard to tell exactly what is going on. But some time next year, we could have a situation where there is excess inventory of some components, which will free up capacity for others.

In the meantime, Biden has licensed American suppliers to sell equipment to Huawei, Semiconductor Manufacturing and other Chinese companies that remain blacklisted, so more capacity becomes available. While the tightness in auto chip supply has eased somewhat, it's very likely that things won’t normalize until the end of 2022, or even in 2023.

As far as overall chip demand is concerned, a slowdown is not expected for a couple more years at least because of the increasingly connected world we live in today that includes more cloud usage, 5G, more IoT, more EVs, more digital entertainment, you name it. All the capacity that’s being built up today could ultimately lead to overcapacity in 2023 or 2024.

But that’s a typical situation for the semiconductor industry that goes through these cycles of tight supplies and strong pricing followed by capacity builds that again lead to extra capacity and stabilizing prices, and then a repetition of these things. Or the cycle could stretch out because of new developments in the digitization of the world.

Given this extremely optimistic outlook, investing in semiconductor stocks seems to be a no-brainer. But we should play with caution because it’s rarely a good idea to pay more. And it’s also important to recognize that the stocks are driven by innovation, so it wouldn’t do to go for a company that has fallen behind on that count. Conversely, it may make sense to pay a bit more for a stock that’s highly innovative.

Consideirng the above, the following stocks belonging to the Zacks classified Electronics – Semiconductors industry (top 17% of Zacks-ranked industries) are worth considering today-

Israel-based Nova offers metrology solutions combining hardware and cutting-edge software for advanced process control in the lithography, etch, chemical mechanical planarization and deposition stages of semiconductor manufacturing. Its products are used in a number of markets including Israel, Taiwan, the U.S., China and Korea.

The Zacks Rank #1 stock has a B for Value and A for Growth.

The lone analyst offering estimates for this stock expects revenue growth of 53.3% in 2021 and 15.0% in 2022. Earnings growth is expected to be 85.0% and 13.3% in the two years, respectively. Nova’s earnings surprises have been at progressively wider margins in the last four quarters, so either the analyst is too conservative or the company is going from strength to strength.

SMART Global Holdings is a designer, manufacturer and supplier of electronic subsystems to OEMs in the computer, industrial, networking, telecommunications, aerospace and defense markets. The company operates primarily in the U.S., Europe, Asia and Latin America.

The Zacks Rank #1 stock has a B for Value and A for Growth.

What’s more, SMART Global shares are up 51.5% over the past year but continue to trade at a mere 8.86X earnings, below its own median level of 12.74X and the S&P 500. So at these levels there is much more upside in the shares.

The Zacks Rank #2 (Buy) stock has an A for both Value and Growth.

The Zacks Consensus Estimate for United Microelectronics’ earnings is up from 89 cents to a dollar in the last 60 days, which is an increase of 12.4%.

The Zacks Rank #2 stock has a Value Score B and Growth Score A.

Silicon Motion shares are up 43.4% year to date but trading at 9.86X earnings, may still be considered cheap (the median multiple over the past year is 13.90X and the S&P currently trades at 21.82X).

The Zacks Rank #1 (Strong Buy) stock has a Value Score B and Growth Score A. 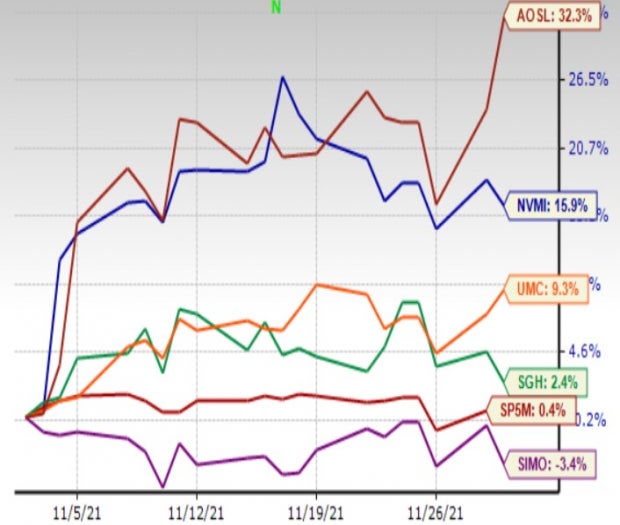