Headquartered in Westchester County, Westchester is the largest independent commercially focused bank with seven branch networks. As of Sep 30, 2021, Westchester had $1.3 billion in assets, $906 million in loans and $1.1 billion in deposits.

The acquisition is expected to provide Valley National with a physical footprint and additional commercial lending expertise in the Westchester County market. With the addition of Westchester's branches, Valley National will now have 233 total branches, 131 in New Jersey, 45 in New York, 41 in Florida, and 16 in Alabama.

The full system integration is expected to be completed in first-quarter 2022.

The deal got regulatory approvals from the Office of the Comptroller of the Currency, the board of governors of the Federal Reserve System and the New York State Department of Financial Services on Oct 27. Westchester shareholders approved the merger on Oct 5.

Moreover, the transaction was expected to be 1% accretive to Valley National's earnings, and neutral to its pro-forma tangible book value and capital ratios.

Supported by a robust balance sheet position, Valley National has been expanding largely via acquisitions. This October, it acquired the Arizona-based advisory firm specializing in the investment and management of tax credits, Dudley Ventures while in September, the company inked a deal to acquire Bank Leumi Le-Israel B.M.'s U.S. banking arm for $1.15 billion.

In 2019, Valley National acquired Oritani Financial for $740 million, while in 2018, it acquired Clearwater, FL-based USAmeriBancorp. The deals along with the several past acquisitions are expected to be earnings accretive and help Valley National diversify revenues.

Over the past year, shares of Valley National have gained 41.3% compared with 47.1% growth recorded by the industry. 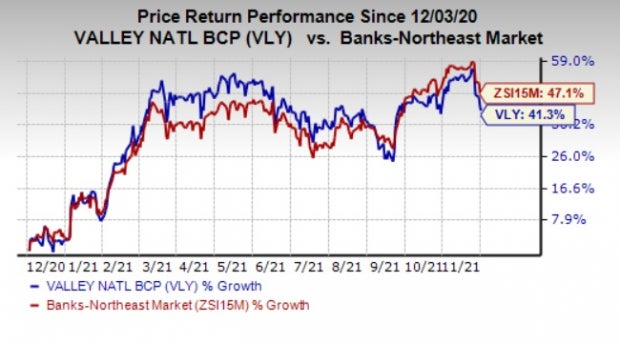 Last month, CVB Financial Corp. (CVBF - Free Report) , the holding company for Citizens Business Bank, announced that Citizens received regulatory approvals from the Federal Deposit Insurance Corporation, and the California Department of Financial Protection and Innovation to complete its previously-announced merger agreement with Suncrest Bank. The stock-and-cash deal worth $204 million, announced this July, is expected to close on or about Jan 7, 2022, subject to the satisfaction of all remaining closing conditions.

In an effort to expand its presence, CVBF announced an agreement and plan of reorganization and merger, according to which Suncrest bank would merge with and into Citizens. The acquisition is the second-largest in CVB Financial's history.

SEI Investments' chairman and CEO, Alfred P. West, Jr., stated, "The financial services landscape is ever-evolving. Our markets continue to face an unprecedented pace of change, and we continuously seek opportunities to stay ahead of and manage this change. By making strategic investments in our solutions and workforce, we drive growth and help our clients make confident decisions for their futures."