3 Reasons to Add Accuray (ARAY) Stock to Your Portfolio

Accuray Incorporated (ARAY - Free Report) has been gaining on the back of its suite of software upgrades. A solid first-quarter fiscal 2022 performance, along with its global reach, is expected to contribute further. However, overdependence on technologies and reimbursement uncertainties persist.

The renowned radiation oncology company has a market capitalization of $452.8 million. Accuray projects 285.7% growth for fiscal 2023, in which it expects to maintain its strong performance. The company surpassed estimates in two of the trailing four quarters, missed the same one and broke even in the other one, the average earnings surprise being 141.67%. 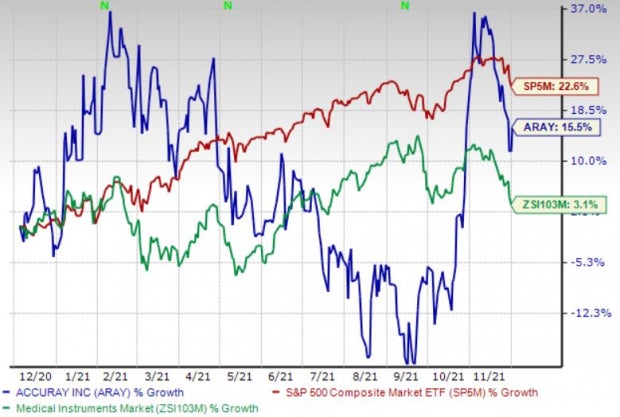 Strong Q1 Results: Accuray’s robust first-quarter fiscal 2022 revenues buoy optimism. The company registered upticks in both its overall top line and its revenue sources during the period, which is encouraging. Receipt of the FDA’s 510(k) clearance for the VOLO Ultra enhancement to the Accuray Precision treatment planning system for the Radixact System, followed by its full commercial launch, is impressive. Strong demand for the ClearRT Helical kVCT Imaging for the Radixact System and new integration with the RayStation treatment planning system for the CyberKnife M6 and S7 Systems raise our optimism on the stock.

Suite of Software Upgrades: We are optimistic about Accuray’s series of software upgradations that has been a growth driver for the company. In recent times, Accuray announced the VOLO Optimizer software upgrade for CyberKnife, which reduces treatment time by up to 50%, thus allowing CyberKnife treatments to be performed in 15 to 30 minutes. The company, in October, showcased its new VOLO Ultra for the Radixact System.

Global Reach: Accuray has been fortifying its foothold globally, thereby raising our optimism. The company, during its fiscal 2022 first-quarter earnings call in November, confirmed that its gross order volume from its China business for the fiscal first quarter represented a huge growth year over year, whereas revenues generated represented a stupendous year-over-year growth. Additionally, Accuray confirmed making continued impressive progress on its Tianjin-produced Type B product.

The company also performed impressively in the Americas, EMEA and the APAC regions (especially Japan).

Overdependence on Technologies: Achieving consumer and third-party payor acceptance of the CyberKnife and TomoTherapy platforms as preferred methods of tumor treatment is crucial to Accuray’s continued success. Physicians will not begin to use or increase the use of the CyberKnife or TomoTherapy platforms unless they determine, based on experience, clinical data and other factors, that the two platforms are safe and effective alternatives to traditional treatment methods.

Accuray is witnessing a positive estimate revision trend for fiscal 2022. In the past 90 days, the Zacks Consensus Estimate for its earnings has moved 250% north to 7 cents.

The Zacks Consensus Estimate for the company’s second-quarter fiscal 2022 revenues is pegged at $104.9 million, suggesting a 7.6% rise from the year-ago quarter’s reported number.

LabCorp, carrying a Zacks Rank #2, reported third-quarter 2021 adjusted EPS of $6.82, which beat the Zacks Consensus Estimate by 42.9%. Revenues of $4.06 billion outpaced the consensus mark by 13.4%. You can see the complete list of today’s Zacks #1 Rank (Strong Buy) stocks here.

LabCorp has an estimated long-term growth rate of 10.6%. The company surpassed estimates in the trailing four quarters, the average surprise being 25.73%.

Thermo Fisher has an estimated long-term growth rate of 14%. The company surpassed estimates in the trailing four quarters, the average surprise being 9.02%.

AMN Healthcare has an estimated long-term growth rate of 16.2%. The company surpassed estimates in the trailing four quarters, the average surprise being 19.51%.