Selling returned to the market in a big way Friday, prolonging a wild up-and-down stretch that began on Black Friday. Constant headlines and current uncertainty surrounding the Omicron variant, alongside Jay Powell’s comments that inflation might justify faster tapering have driven the recent wave of selling and volatility.

The central bank had planned to end its run of stimulus-focused bond purchases by June, while leaving interest rates untouched. Ongoing supply chain bottlenecks and rising prices might force their hand much sooner. Wall Street also honed in on Powell’s suggestion that it could be time to end its ‘transitory’ phrasing.

It’s unclear what impact the new variant will have on rebounding economies and international travel. And the market reacted to those unknowns in a big way. Former high-flyers and big covid winners are getting crushed, as investors drop growth names, with tons hitting new 52-week lows.

The selling, some of which slowly began in the spring, has washed away a year’s worth of gains for many and completely recalibrated tons of longer-term tech plays that had become overheated following the massive run off the covid lows.

The S&P 500 and the Nasdaq both whipsawed around their 50-day moving averages in the last several sessions. And there could be more near-term selling, with the S&P 500 down around 4% off its highs and the Nasdaq about 7% lower after it fell 1.9% Friday.

Yet, investors with longer-term horizons can do themselves a disservice by attempting to precisely time the market. The last two years, though extraordinary, showcased the need to attempt to stay exposed and consider adding your favorite stocks at discounts when you can. This is what the Wall Street heavyweights do. 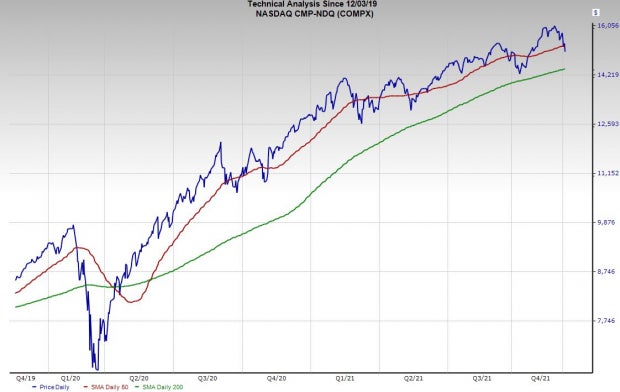 CrowdStrike is a cloud-focused cybersecurity firm that utilizes machine learning and AI to protect endpoints and cloud workloads. This is crucial in a cloud age full of rapidly expanding endpoints that include laptops, desktops, smartphones, IoT devices, and more. CRWD has expanded in the last year through acquisitions, as it aims to bolster its offerings in a world where hacking and cyber security breaches cost trillions of dollars annually.

CrowdStrike went public in 2019 and its revenue soared 93% during its first full year (FY20) before it surged another 82% during its fiscal 2021. CrowdStrike just beat our Q3 FY22 estimates on December 1 and executives raised their full-year guidance.

CrowdStrike’s new subscription customers jumped 75% last quarter to roughly 14,687, with those that pay for four or more modules up 68%. Zacks consensus estimates call for its revenue to climb another 64% to $1.43 billion and then pop nearly 40% higher next year to reach $1.96 billion. And these estimates could improve as analysts update their guidance.

Investors might not love to see the projected slowdown in terms of percentage growth. But CrowdStrike’s top-line expansion is still impressive, with it expected to pull in over $500 million more in annual sales next year, or more than it did in all of FY20. 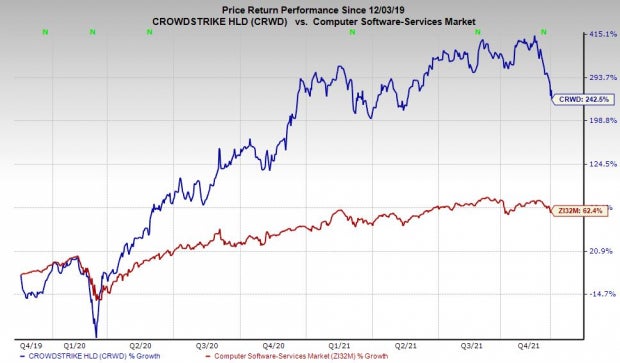 Meanwhile, CrowdStrike’s adjusted earnings are projected to surge 78% this year and another 69% to come in at $0.82 a share in FY23. The company has also consistently topped our EPS estimates, including a 70% beat in its recently-reported quarter.

CRWD lands a Zacks Rank #3 (Hold) at the moment, alongside “B” grades for Growth and Momentum in our Style Scores system. Plus, 16 of the 21 brokerage recommendations Zacks has for CrowdStrike are “Strong Buys,” with two more “Buys” and only one below a “Hold.” And fitting with today’s topic, the stock is trading well off its high and at a huge discount to its price targets.

CrowdStrike has plummeted 35% from its records on November 10, which included a 6% dive Friday that had it hovering at $197 per share. The stock is not yet at 52-week lows, but it’s trading where it was in mid-December 2020. Its lightning quick down pushed it well below both its 50-day and 200-day moving averages and into oversold RSI territory (30 or under) at 26.

CrowdStrike shares are still up 250% in the past two years to destroy its industry’s 30% climb. And the pullback could see both long-term buyers and technical-focused traders jump in sooner than later. The stock is also trading at roughly 18-month lows at 25.5X forward 12-month sales. This might still be too expensive for many. But for those looking to scoop up a growth tech name trading nearly 60% below its current Zacks consensus price target, CRWD could be worth considering.

Mastercard is a global payments powerhouse that operates consumer and business-centric credits card, as well as an elaborate backend processing network. The company in recent years has bolstered its fintech offerings and MA is poised to make a splash in the cryptocurrency world. Mastercard is currently working to integrate and make it easier for crypto players to connect to its network.

Mastercard’s cryptocurrency efforts include “signing up a number of new crypto wallet providers and exchanges” in Q3. Plus, it acquired in October security and fraud monitoring firm CipherTrace for its “expertise, technologies, and insights into more than 900 cryptocurrencies.” MA also made a deal with Bakkt at the end of October to help “enable consumers to buy, sell and hold cryptocurrency, deliver unique, crypto-centric loyalty opportunities, and streamline issuance of branded crypto debit and credit cards.”

On top of that, MA is prepared to enter the red-hot ‘buy now, pay later’ space with its recently announced Mastercard Installments offering. The company said it’s set to stand out in the growing market because it “enables banks, lenders, fintechs and wallets to seamlessly bring buy-now-pay-later solutions to consumers and merchants at scale.” The move could be pivotal as the space grows in popularity with a younger generation of consumers.

MA topped our Q3 estimates on Oct. 28 amid solid domestic spending and its cross-border unit returned to pre-pandemic levels. More recently, the company on November 30 announced that it raised its quarterly dividend by 11%. Investors should also be pleased to know that MA’s board authorized an additional $8 billion share repurchase program at the same time.

Mastercard revenue did take a hit last year, as people cut back on spending, especially on travel. Luckily, it’s already bounced back in a big way and Zacks estimates call for its FY21 revenue to climb 23% to outpace its pre-pandemic total by $2 billion. It is then projected to jump another 20% in FY22 to reach $22.49 billion in sales. 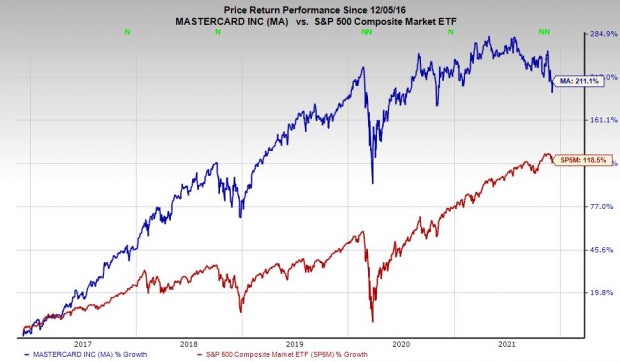 Meanwhile, its adjusted earnings are expected to climb by 29% and 27%, respectively and it has consistently topped our bottom-line estimates. Even with all of the positives, Mastercard stock has fallen nearly 20% from its April records, including a 13% decline since mid-November.

MA stock showcased some life in the last few days and even popped 0.60% during regular hours Friday. The recent positivity could mean Wall Street’s not that worried about a downturn in global travel. Plus, Mastercard trades 33% below its current Zacks consensus price target of $427 a share. And 18 of the 23 brokerage recommendations Zacks has are “Strong Buys” with nothing below a “Hold.”

Mastercard currently lands Zacks Rank #3 (Hold) and its stock has climbed over 200% in the last five years to blow away its industry and its sector. The recent downturn has also readjusted its valuation, with it trading right near year-long lows at 31.2X forward 12-month earnings. This also represents solid value compared to the 37.1X it traded at right before the initial covid selloff.