Newmont Corporation (NEM - Free Report) announced the pricing of its offering of $1 billion total principal amount of 2.6% sustainability-linked notes due 2023. The public offering is expected to be completed on Dec 20, 2021, subject to customary conditions.

The offering is being made pursuant to Newmont’s shelf-registration statement filed with the Securities and Exchange Commission. The notes will be senior unsecured obligations of the company and will rank equally with its current and future unsecured senior debt and senior to its future subordinated debt.

The notes will be guaranteed on a senior unsecured basis by the company’s subsidiary Newmont USA Limited. Newmont will be the first company among its mining industry peers to issue a sustainability-linked bond. This reflects a further step in aligning its financial strategy with environmental, social and governance commitments.

The coupon of these notes will be linked to the company’s performance against 2030 emissions reduction goal and the representation of women in senior leadership position goal. The interest rate payable will be raised if the company cannot achieve the stated targets by 2030.

Shares of Newmont have dropped 6% in the past year compared with a 7.5% decline of the industry. 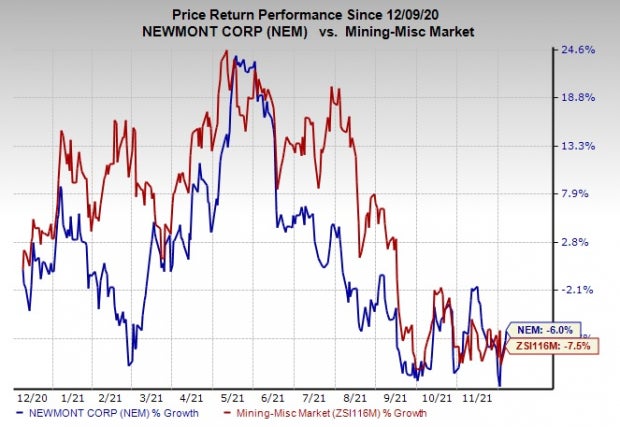 In its last earnings call, Newmont stated that it expects attributable gold production of 6 million ounces for 2021, down from 6.5 million ounces expected earlier. The company also expects gold CAS to be $790 per ounce and all-in sustaining costs (AISC) to be $1,050 per ounce, up from the earlier view of $750 and $970 per ounce, respectively.

Newmont stated that Boddington faced issues from severe weather and Nevada Gold Mines is also witnessing headwinds. The revised upside in the cost outlook includes the impact of lower production volumes as well as elevated royalties and production taxes at higher gold prices.

It recently announced its outlook for 2022 with attributable gold production guidance of 6.2 million ounces and AISC of $1,050 per ounce, assuming a gold price of $1,800 per ounce. Total gold production combined with other metals is projected to be 7.5 million gold equivalent ounces in 2022.

Celanese has an expected earnings growth rate of 139.5% for the current year. The Zacks Consensus Estimate for current-year earnings has been revised 8.7% upward in the past 60 days.

Celanese beat the Zacks Consensus Estimate for earnings in each of the last four quarters. The company has a trailing four-quarter earnings surprise of roughly 12.7%, on average. The stock has surged around 22.4% in a year. CE currently carries a Zacks Rank #2 (Buy). You can see the complete list of today’s Zacks #1 Rank (Strong Buy) stocks here.

Chemours beat the Zacks Consensus Estimate for earnings in all of the last four quarters. The company has a trailing four-quarter earnings surprise of roughly 34.2%, on average. CC has increased around 19.6% in a year. CC currently sports a Zacks Rank #1.

Nucor beat the Zacks Consensus Estimate for earnings in two of the last four quarters. NUE has a trailing four-quarter earnings surprise of 2.7%, on average. The company’s shares have gained around 102.1% in a year. It currently carries a Zacks Rank #2.

Jack in the Box (JACK) Banks on Menu Innovation, Hurt by Costs