Solenova signed an engineering, procurement and construction contract for the first phase of the solar power plant. Solenova is a joint venture between Eni and the state-owned oil and gas company, Sonangol. Eni expects the facility to start operating in the fourth quarter of 2022.

The project involves the installation of 50 megawatts-peak of solar photovoltaic panels near Caraculo. The project is situated in the Namibe province, which is known for its severe drought rather than oil resources.

The Caraculo photovoltaic plant will be a major source of electricity from renewable resources in the Namibe province. This will reduce the utilization of diesel to generate electricity, thereby reducing greenhouse gas (GHG) emissions and further boosting Angola’s clean energy transition.

The commissioning of the project is expected to reduce the energy deficit between the north of Angola, where the majority of the infrastructure is centered, and the south of the country. Angola authorities are working on expanding the country’s electricity mix, and increasing electricity generation and transmission infrastructure in the south.

Eni has a major presence in the African country of Angola, with investments in the upstream, downstream, gas and power, and renewables sectors.

Shares of Eni have outperformed the industry in the past six months. The stock has gained 11.1% compared with the industry’s 8.7% growth. 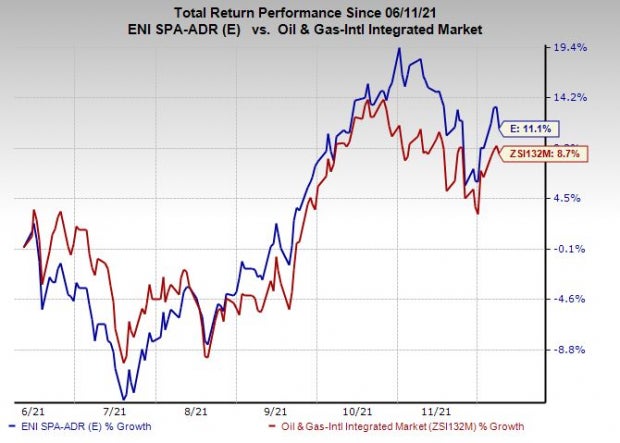 Marathon Petroleum Corporation (MPC - Free Report) is a leading independent refiner, transporter and marketer of petroleum products. Marathon Petroleum's $23.3 billion acquisition of Andeavor has integrated the premier assets of both companies, bolstering the scale and leadership position of the combined entity in the United States.

In the past year, shares of Marathon Petroleum have gained 53.6% compared with the industry's growth of 28%. MPC's earnings for 2021 are expected to surge 155.3% year over year. MPC currently has a Zacks Style Score of A for Momentum. MPC repurchased shares worth $1.5 billion during the July-October period as part of its announcement to buy back $10 billion worth of common stock.

Continental Resources, Inc. (CLR - Free Report) is an explorer and producer of oil and natural gas. CLR operates resources across the East, South and North areas in the United States.  Moreover, Continental Resources’ strategic water assets add huge value to its operations in Bakken and Oklahoma. As of Dec 31, 2020, CLR’s estimated proved reserves were 1,103.8 MMBoe.

In the past year, shares of Continental Resources have gained 145.4% compared with the industry’s growth of 96.2%. CLR’s earnings for 2021 are expected to surge 485.5% year over year. CLR currently has a Zacks Style Score of A for Growth and B for Value. Notably, CLR’s board of directors increased its quarterly dividend payment to 20 cents per share from 15 cents in the previous quarter. Continental Resources also resumed its existing stock repurchase program. It already executed $65 million of share repurchases in the September-end quarter, while $618 million of the share-repurchase capacity remains available.

APA Corporation (APA - Free Report) is one of the world's leading independent energy companies that engage in the exploration, development and production of natural gas, crude oil and natural gas liquids. One of the largest oil producers in Permian, APA has more than 2.9 million gross acres in the region, with exposure to Midland Basin, Delaware Basin, and Central Basin Platform/ Northwestern Shelf. As of 2020 end, APA had a proved reserve base of 874 million oil-equivalent barrels.

APA’s earnings for 2021 are expected to surge 477% year over year. APA currently has a Zacks Style Score of B for growth, and A for both Growth and Momentum. Recently, the company got approval from the board of directors to double the quarterly dividend to 12.5 cents per share. APA management sees the dividend hike as the beginning of its path to return ‘a higher percentage of cash flow’ to its investors.