Here's Why You Should Buy Albemarle (ALB) Stock Right Now

Shares of Albemarle Corporation (ALB - Free Report) have shot up around 46% over the past six months. The company is benefiting from higher lithium prices and volumes, capacity expansion and cost-saving actions.

We are positive on the company’s prospects and believe that the time is right for you to add the stock to portfolio as it looks promising and is poised to carry the momentum ahead. 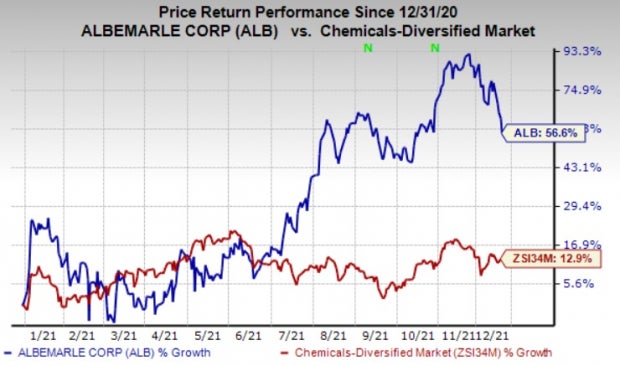 Albemarle has outpaced the Zacks Consensus Estimate in each of the trailing four quarters. In this time frame, it has delivered an earnings surprise of roughly 22.1%, on average.

Over the past two months, the Zacks Consensus Estimate for Albemarle for 2021 has increased around 12.7%. The consensus estimate for fourth-quarter 2021 has also been revised 15.7% upward over the same time frame. The favorable estimate revisions instill investor confidence in the stock.

The company is also strategically executing its projects aimed at boosting its global lithium derivative capacity. It remains focused on investing in high-return projects to drive productivity. The company is well placed to gain from long-term growth in the battery-grade lithium market.

Albemarle is also benefiting from cost-saving and productivity initiatives. Its cost actions are expected to support its margins. The company expects to achieve $75 million of productivity improvement on a year-over-year basis in 2021.

The company also remains committed to deliver incremental returns to its shareholders. It has raised its annual dividend for the 27th straight year. Albemarle remains focused on maintaining its dividend payout. The company also remains committed to maintain adequate financial flexibility with ample liquidity. It had liquidity of around $2 billion at the end of the third quarter of 2021.

Nutrien has an expected earnings growth rate of 233.3% for the current year. The Zacks Consensus Estimate for NTR's current-year earnings has been revised 18.1% upward over the last 60 days.

Nutrien beat the Zacks Consensus Estimate for earnings in three of the last four quarters while missing once. It has a trailing four-quarter earnings surprise of roughly 73.5%, on average. NTR has rallied around 49% in a year.

AdvanSix beat the Zacks Consensus Estimate for earnings in each of the trailing four quarters, the average being 46.9%. ASIX has rallied around 114% in a year.

Intrepid Potash has a projected earnings growth rate of 244.7% for the current year. The consensus estimate for IPI’s current year has been revised 3.3% upward over the last 60 days.

Intrepid Potash beat the Zacks Consensus Estimate for earnings in three of the last four quarters while missing once. It has a trailing four-quarter earnings surprise of roughly 132.9%, on average. IPI shares have surged around 157% in a year.