Newmont Corporation (NEM - Free Report) recently received total net proceeds of roughly $992 million after deducting underwriting discounts before expenses. It has received this upon the closing of its registered public offering of $1 billion total principal amount of 2.6% Sustainability-Linked Senior Notes due 2032.

Newmont is the first in the mining industry to issue a sustainability-linked bond, reflecting a further step in syncing its financing strategy with environmental, social and governance commitments.

The notes are senior unsecured obligations of Newmont and rank equally with its current and future unsecured senior debt and senior to its future subordinated debt. They are guaranteed on a senior unsecured basis by its subsidiary, Newmont USA Limited.

The coupon of the notes is related to Newmont’s performance aligned with key ESG commitments regarding 2030 emissions reduction targets and the representation of women in senior leadership roles target. In early 2021, Newmont entered into a $3-billion sustainability-linked revolving credit facility, also among the first in the industry.

The interest rate payable on the notes will be raised if Newmont fails to reach the stated targets by 2030. It published a Sustainability-Linked Bond Framework and obtained a second party opinion on the framework from ISS ESG.

Shares of Newmont have declined 3.2% in the past year compared with a 6.3% fall of the industry. 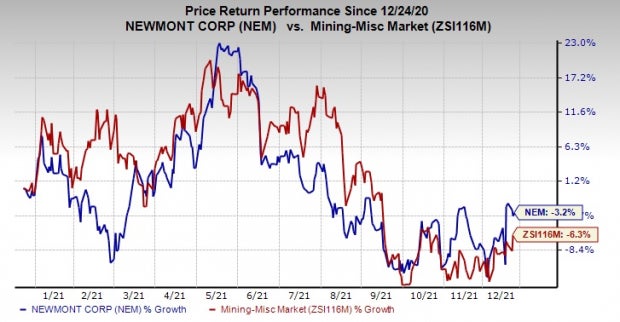 Earlier this month, the company announced its outlook for 2022 with attributable gold production guidance of 6.2 million ounces and all-in sustaining costs (AISC) of $1,050 per ounce, assuming a gold price of $1,800 per ounce.

Total gold production combined with other metals is projected to be 7.5 million gold equivalent ounces in 2022. It is expected to improve over the longer term, with declining costs through investments in new, lower-cost production and benefits from potential improvements.

Nutrien has an expected earnings growth rate of 233.3% for the current year. The Zacks Consensus Estimate for NTR’s current-year earnings has been revised 16.3% upward in the past 60 days.

Nutrien beat the Zacks Consensus Estimate for earnings in three of the last four quarters. The company has a trailing four-quarter earnings surprise of roughly 73.5%, on average. The stock has rallied 56.9% in a year. NTR currently sports a Zacks Rank #1 (Strong Buy). You can see the complete list of today’s Zacks #1 Rank stocks here.

Chemours beat the Zacks Consensus Estimate for earnings in the last four quarters. The company has a trailing four-quarter earnings surprise of roughly 34.2%, on average. It has rallied 19.5% over a year. CC currently flaunts a Zacks Rank #1.

AdvanSix beat the Zacks Consensus Estimate for earnings in each of the trailing four quarters, the average being 46.9%. ASIX has rallied 125.7% in a year. It currently carries a Zacks Rank #2 (Buy).