Shares of Ligand Pharmaceuticals (LGND - Free Report) have gained 62.1% so far this year, primarily driven by its promising technology platforms that have helped develop promising new drugs. The Zacks Medical - Biomedical and Genetics industry has declined 19.6% in the same period. 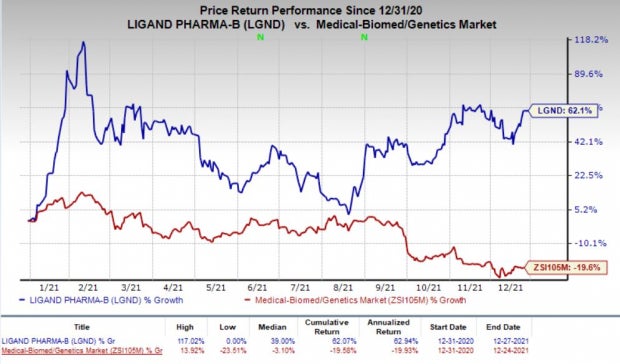 The surge in cases due to the Delta variant has been boosting demand for Gilead’s Veklury so far this year. Gilead recorded Veklury’s sales of $4.2 billion in the first nine months of 2021.

The higher sales of these drugs have driven Ligand’s top line year to date. The prospects of GILD’s Veklury and AMGN’s Kyrpolis have been the primary driver of Ligand’s shares so far this year which is likely to continue in 2022.

The recent spike in COVID-19 infections amid the emergence of another deadly variant, Omicron, is likely to support the demand for Veklury going forward. Gilead raised revenue guidance for Veklury on its third-quarter earnings call by more than 60%, estimated at the midpoints of the earlier and updated guided range.

Moreover, momentum in Amgen’s Kyprolis sales is likely to continue on the back of potential label expansions.

The performance of these two drugs will be a major catalyst for Ligand’s shares going forward. We expect these drugs to continue driving Ligand’s stock next year.

Apart from Captisol, Ligand has another promising technology called OmniAb in its portfolio. It is newer than the Captisol technology and has longer patent protection as well. The first OmniAb-derived drug, Gloria Biosciences’ zimberelimab, received approval in China as a treatment for Hodgkin’s lymphoma in August. A few potential approvals for the partnered OmniAb-derived drugs are expected in the upcoming quarters.

Approvals to OmniAb-derived products will bring additional revenues for Ligand going forward, which may help propel the company’s shares higher. We note that Ligand is planning to spin off its OmniAb-related business into a separate company.

Ligand has several other promising technology platforms, which are also attracting collaboration agreements. Earlier this month, Ligand and GlaxoSmithKline (GSK - Free Report) expanded their current agreement to include an additional neurological target.