Exxon Mobil Corporation’s (XOM - Free Report) Baytown refinery in Texas continues to produce at reduced rates after a fire broke out at a reformer feed hydrotreater.

Located along the Houston Ship Channel, the Baytown refinery is one of the largest refining and petrochemical facilities in the United States. It has a processing capacity of 560,500 barrels per day of crude oil.

The fire took place at the refinery’s hydrotreater unit, which had been closed due to a leakage in bypass line. Notably, reformer feed hydrotreater eliminates sulfur and other contaminants from partially refined oil to produce refined products.

The fire affected a gasoline-producing unit, which could affect premium gasoline prices. Beside this, it affected a toluene benzene unit and a nearby cooling tower. The cause of the fire has not yet been determined.

Although there were no fatalities, a few workers were hospitalized with injuries. While workers were relocated from that refinery section, the rest of the facility continued its operations.  ExxonMobil has been examining the air quality at the refinery and it has not detected any adverse impact at present.

This is the second fire incident at the Baytown refinery in two years. In 2019, a fire broke out at a polypropylene recovery unit, in which plastic is purified for production. ExxonMobil’s rigorous focus on cost reductions is expected to have increased dangers as routine maintenance of facilities has been reduced to increase profits.

ExxonMobil is adjusting production rates at other Baytown facilities to focus on stabilizing the affected units.The fire incident at the Baytown refinery could reduce gasoline supplies in the United States at times when crude stocks are being drawn down domestically.

Shares of ExxonMobil have outperformed the industry in the past three months. The XOM stock has gained 4.7% compared with the industry’s 4.6% growth. 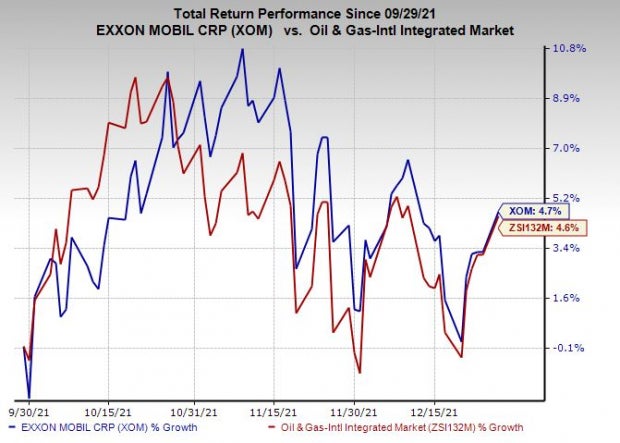 Sunoco LP (SUN - Free Report) is a master limited partnership that engages in distributing motor fuel to roughly 10,000 customers, including independent dealers, commercial customers, convenience stores and distributors. In the United States, Sunoco is among the largest motor fuel distributors in the wholesale market by volume. By 2020, the partnership sold 7.1 billion gallons of motor fuel.

SM Energy (SM - Free Report) is one of the most attractive players in the exploration and production space, which engages in the exploration, exploitation, development, acquisition and production of natural gas and crude oil in North America. SM’s operations focus on the Permian Basin, and the South Texas and Gulf Coast region. SM has 443,188 net acres under its possession, of which 33.5% is developed.

SM Energy’s earnings for 2021 are expected to surge 739.1% year over year. SM currently has a Zacks Style Score of A for Growth and B for Momentum. The upstream energy player beat the Zacks Consensus Estimate thrice in the last four quarters and missed once, with an earnings surprise of 126.3%, on average.

PDC Energy (PDCE - Free Report) is an independent upstream operator that engages in the exploration, development and production of natural gas, crude oil and natural gas liquids. PDCE, which reached its present form following the January 2020 combination with SRC Energy, is currently the second-largest producer in the Denver-Julesburg Basin. As of 2020-end, PDC Energy’s total estimated proved reserves were 731,073 thousand barrels of oil equivalent.

PDC Energy’s earnings for 2021 are expected to surge 286.2% year over year. PDCE beat the Zacks Consensus Estimate in the last four quarters, ending with an earnings surprise of 51.06%, on average. As of Sep 30, 2021, PDC Energy had $1.7 billion in total liquidity, while its credit facility currently has a total borrowing base of $2.4 billion. Moreover, PDCE’s debt maturity profile is favorable.