Buy These 3 Semiconductor Stocks to Start 2022 with a Bang

The last two years have been pretty fantastic for many tech players, especially those on the building-block side, and for obvious reasons. We had all those work loads moving to remote locations, necessitating a massive decentralization of compute resources. The big question for everyone is whether and to what extent that momentum will continue this year.

A number of experts have weighed on the possibilities already, and tech has been referred to as a defensive play during the pandemic. And that’s so true. Even if you look past the big five or six stocks that were more or less responsible for what happened with the S&P 500 and the Nasdaq, there really has been a big story out there, all to do with supporting the players bringing about changes in computing.

Remote working isn’t the only driver, of course. We are, on the whole, doing much more online and through automated processes, not just on an individual level but also organizational. And again, everyone who can is operating AI models, creating huge opportunities in data collection and processing. The EV revolution also continues to unfold, with exciting implications for semiconductor players.

So it was really refreshing to hear somebody like AMD AMD CEO Lisa Su confirming my expectations with the statement that the ongoing strength in semiconductor demand is ‘the new normal.’ Of course, she also said that supply chain issues remain, particularly in the desktop space, which could lead to a flattish year for that segment. But that is something that the industry will iron out as we move through the year.

Photronics is a leading provider of photomasks that are stencil-like plates allowing light to shine through in specific patterns, thus facilitating the imprinting of designs onto a semiconductor or FPD substrate and other types of electrical and optical components. They are manufactured on the basis of customer product designs at facilities in Asia, Europe and North America.

Given the nature of its offering, Photronics stands to gain from new chip designs, expansion of capacity by semiconductor manufacturers including foundries and others, as well as the retooling of existing capacity to build new designs. So the current strength in the semiconductor market that is driving so many players to retool and expand capacity is extremely positive for Photronics’ prospects.

The company is also seeing very strong growth in China, which is racing to become self-sufficient in chips. China contributes more than a third of its sales at the moment, strength that should continue for the next few quarters at least.

In the last quarter, Photronics beat the Zacks Consensus Estimate by 32.0% on revenue that beat by 3.6%. The estimate for the current year ending in October jumped 27 cents (26.2%) in the last 30 days.

Photonics is currently expected to grow revenue and earnings both in 2022 and 2023.

The Zacks Rank #1 (Strong Buy) stock belongs to the Semiconductor Equipment – Photomasks industry, which is in the top 2% of Zacks-classified industries, indicating strong upside potential.

Photronics shares are up 43.0% in the last three months.

The Zacks Rank #1 stock belongs to the Semiconductor – Discretes industry, which is in the top 7% of Zacks-classified industries, a strong indication of upside potential.

Tokyo Electron shares are up 41.0% in the last three months.

Alpha and Omega did see a slight hiccup in 2020 as a result of the pandemic, but it recovered strongly thereafter. It has topped estimates by strong double-digits in each of the last four quarters. The estimate revisions history looks good: the 2022 (ending June) earnings estimate jumped 67 cents (19.6%) in the last 60 days while the 2023 estimate jumped 47 cents (12.9%).

Analysts currently expect Alpha and Omega to generate revenue and earnings growth of 17.8% and 39.3% this year. Growth is expected to continue in 2023.

Alpha and Omega shares are up 103.0% in the last three months. 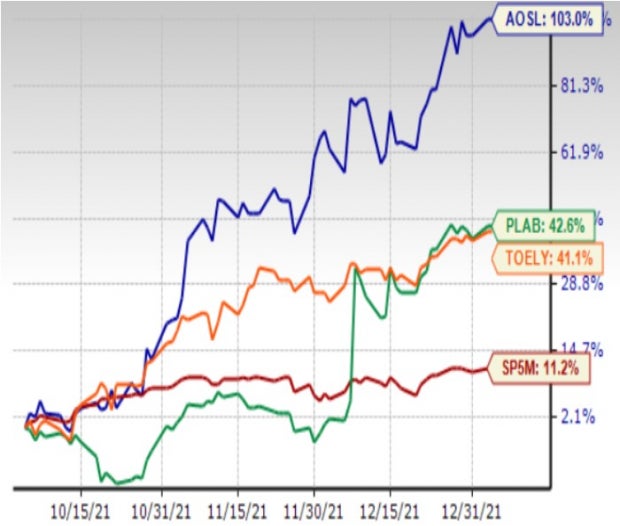