Genprex plans to initiate an open-label, multi-center phase I/II study – Acclaim-2 – which will evaluate the combo of Reqorsa plus Keytruda for the given indication in the first quarter of 2022.

Please note that data from pre-clinical studies have shown that Reqorsa in combination with Keytruda was more effective in increasing the survival of mice with a humanized immune system which had metastatic lung cancer than Keytruda alone.

Shares of Genprex were up 167.2% on Monday following the announcement of the above news. The stock has declined 15.3% in the past year compared with the industry’s decrease of 21.9%. 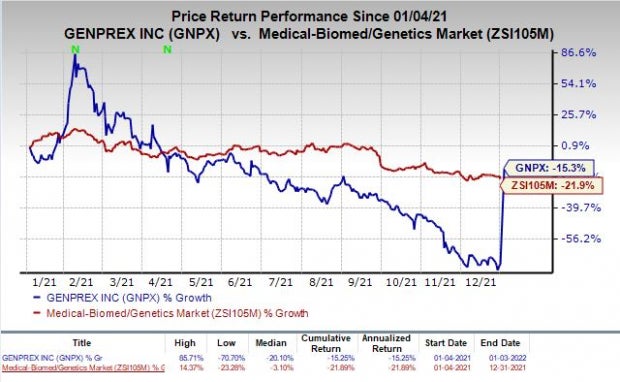 Fast Track designation is designed to facilitate the development and acceleration of the review of drugs to treat serious conditions and fill an unmet medical need or offer a potential advantage over the existing treatments.

In 2020, the FDA granted Fast Track designation to Reqorsa in combination with AstraZeneca’s (AZN - Free Report) Tagrisso for the treatment of patients with histologically confirmed unresectable stage III or IV NSCLC, with EGFR mutations that progressed following treatment with Tagrisso.

Per the American Cancer Society, more than 235,000 new cases of lung cancer were reported in the United States in 2021, resulting in more than 131,000 deaths from the disease. Hence, if successfully developed and upon potential approval, Reqorsa might be able to tap into a market with significant potential while treating patients with late-stage NSCLC, besides driving growth for Genprex.

Genprex currently carries a Zacks Rank #3 (Hold). A better-ranked stock in the biotech sector is vTv Therapeutics Inc. (VTVT - Free Report) , which has a Zacks Rank #2 (Buy) at present. You can see the complete list of today’s Zacks #1 Rank (Strong Buy) stocks here.

vTv Therapeutics’ loss per share estimates have narrowed 2.9% for 2022, over the past 60 days.