Crown Castle International Corp. (CCI - Free Report) is well-positioned to gain from tailwinds, such as growth in mobile data usage, spectrum availability and high-network investments in wireless carriers. CCI is likely to grow, given its ability to offer a holistic network solution with towers, fiber and small cells, and ample liquidity.

Wireless services are advancing rapidly in terms of additional features and capabilities. Moreover, wireless data consumption is expected to increase considerably over the next several years, driven by an increased innovation and adoption of data-driven mobile devices and applications, such as machine-to-machine connections, social networking and streaming of video.

As the data volume of wireless and wired networks is growing rapidly, the network carriers continue spending more on network deployments to harness spectrum abilities as well as improve and densify their cell sites and coverage.

Additionally, Crown Castle has sufficient liquidity and enjoys a decent balance-sheet position. CCI exited third-quarter 2021 with cash and cash equivalents of $357 million, and $5 billion of undrawn capacity in its revolver. As of the third-quarter end, CCI enjoyed investment-grade credit ratings of BBB-, BBB+ and Baa3 from Standard & Poor’s, Fitch and Moody’s, respectively, facilitating its access to the debt markets at attractive terms.

Shares of this currently Zacks Rank #2 (Buy) Crown Castle have appreciated 20.5% in the past three months, outperforming the industry’s rally of 14.9%. However, the estimate revision trend of 2021 funds from operations (FFO) per share does not indicate a favorable outlook for CCI as the same has been steady over the past month. You can see the complete list of today’s Zacks #1 Rank (Strong Buy)  stocks here. 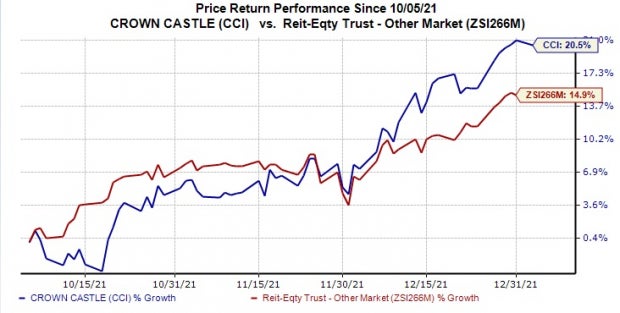 Hence, loss of either Verizon, AT&T and T-Mobile or any consolidation among the three will significantly hamper Crown Castle’s top line. CCI’s performance is dependent on carrier spending and therefore any pullback or rationalization in network spending by tenants might deter its growth.

The Zacks Consensus Estimate for Verizon’s 2021 earnings per share has moved marginally north in the past month. VZ is currently Zacks #3 (Hold) Ranked.

Over the last four quarters, Verizon’s earnings per share surpassed the consensus mark on all occasions, the average surprise being 3.73%.

Shares of VZ have declined 3.8% in the past three months compared with the industry’s decrease of 6.2%.

The Zacks Consensus Estimate for AT&T’s 2021 earnings per share has moved marginally north in the past two months. T is currently a #3 Ranked player.

AT&T’s earnings per share surpassed the consensus mark in all the last four quarters, the average surprise being 10.02%. Shares of T have declined 7% in the past three months compared with the industry’s fall of 6.2%.

The Zacks Consensus Estimate for T-Mobile’s 2021 earnings per share has moved marginally south in the past month. TMUS is currently a #3 Ranked player.

T-Mobile’s earnings per share surpassed the consensus mark in all the last four quarters, the average surprise being 55.3%. Shares of TMUS have declined 8.8% in the past three months compared with the industry’s fall of 6.2%.