Conagra’s quarterly adjusted earnings per share (EPS) came in at 64 cents, which missed the Zacks Consensus Estimate of 68 cents per share and tumbled 21% year over year. The year-over-year downside was primarily caused by lower gross profit. On a two-year compound annualized basis, adjusted EPS climbed 0.8%.

Conagra generated net sales of $3,058.9 million, which advanced 2.1% year over year. The figure surpassed the Zacks Consensus Estimate of $3,057 million. The year-over-year sales increase was the result of higher organic sales and positive currency impacts, partly negated by divestitures of the H.K. Anderson business, the Peter Pan peanut butter business and the Egg Beaters business. These divestitures are collectively referred to as Sold Businesses.

Organic net sales rose 2.6% due to price/mix, which improved 6.8%. Price/mix was backed by a positive brand mix and net pricing stemming from the company’s inflation-induced pricing actions. This was negated by volumes that dropped 4.2%, affected by tough comparisons with the year-ago period’s spike in at-home food demand stemming from the pandemic outbreak (in the retail segments). On a two-year compounded annualized basis, quarterly net sales and organic net sales rose 4.1% and 5.3%, respectively. 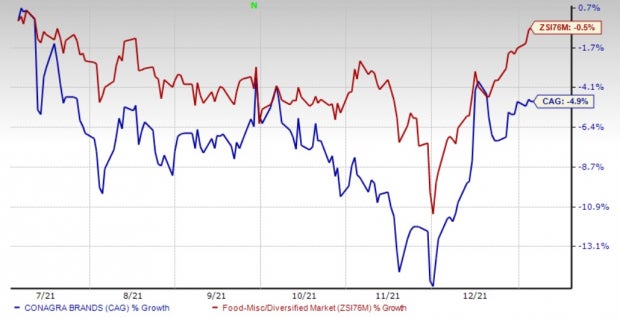 Grocery & Snacks: Quarterly net sales in the segment came in at $1,264.5 million, down 1.4% year over year due to lower organic sales and impacts from Sold Businesses. Organic net sales declined 0.6%, with volumes down 5.3%. Volumes were mainly hurt by the lapping of the year-ago quarter’s spike in at-home food demand. Price/mix jumped 4.7%. During the quarter, CAG saw an increased share in staple categories like beans and in snacking categories, including popcorn and seeds.

Refrigerated & Frozen: Net sales grew 3% to $1,285.9 million due to the impact of Sold businesses, partly contributed by higher organic net sales. Organic sales rose 3.9% on a price/mix increase of 8.6%. However, volumes were down 4.7% due to tough year-over-year comparisons. The company saw an improved share in frozen single-serve meals, whipped topping and frozen desserts categories.

International: Net sales increased 5% to $262.2 million, reflecting a positive impact from foreign currency translations and improved organic net sales. However, the adverse impact from Solid Businesses was a downside. On an organic basis, net sales and price/mix rose 2.1% and 7.9%, respectively, as volumes fell 5.8%.

Foodservice: Sales advanced 14.9% to $246.3 million due to a rise in organic sales, slightly offset by Sold Businesses’ impact. Organic sales surged 15.2% and volumes were up 9.7%, backed by recovering restaurant traffic. Price/mix increased 6.1%.

During the quarter, Conagra paid out a quarterly dividend of 31.25 cents per share, which marked an increase from the previous rate.

Management raised its organic net sales guidance for fiscal 2022 anticipating continued strength in the top line. However, it lowered its adjusted operating margin view due to increased cost of goods sold inflation and the timing of extra pricing activities. CAG reaffirmed its adjusted EPS guidance.

The company earlier stated that it expects consumer demand for its retail products to be above historical levels during fiscal 2022 due to new consumer habits cultivated amid the pandemic. Taking account of the year-to-date trends, which include better-than-anticipated consumer demand, lower-than-expected demand elasticities as well as improved pricing actions, management expects organic net sales improvement to be greater than the previous forecast. Organic net sales are now anticipated to rise 3%, up from nearly 1% expected before.

The company continues to battle elevated cost of goods sold inflation. Though it is taking necessary pricing and saving actions, the effect of these initiatives is likely to aid margins in the second half of fiscal 2022. Gross inflation is likely to be 14% now in fiscal 2022 compared with nearly 11% expected before. Adjusted operating margin is anticipated to be nearly 15.5% now compared with the previous view of 16%. Adjusted EPS is still envisioned to be about $2.50.

Shares of this Zacks Rank #3 (Hold) company have declined 5.6% in the past six months compared with the industry’s fall of 0.8%.

Flower Foods, the producer of packaged bakery foods in the United States, currently sports a Zacks Rank #1 (Strong Buy) . Shares of Flower Foods have increased 16.4% in the past six months. You can see the complete list of today’s Zacks #1 Rank stocks here.

The Zacks Consensus Estimate for Flower Foods’ 2022 sales suggests growth of 1.9% from the year-ago reported figure. FLO has a trailing four-quarter earnings surprise of 15.4%, on average.

United Natural Foods, the leading distributor of natural, organic, and specialty food and non-food products in the United States and Canada, carries a Zacks Rank #2 (Buy) at present. Shares of United Natural Foods have moved up 33.4% in the past six months.

The Zacks Consensus Estimate for United Natural Foods’ current financial-year EPS suggests growth of 7.7% from the year-ago reported number. UNFI has a trailing four-quarter earnings surprise of 35.4%, on average.

Medifast, the manufacturer of healthy living products, and other consumable health and nutritional products, currently carries a Zacks Rank of 2. Shares of Medifast have declined 26.6% in the past six months.

The Zacks Consensus Estimate for Medifast’s 2022 sales suggests growth of 10% from the year-ago reported figure. MED has a trailing four-quarter earnings surprise of 17.3%, on average.