Absci will receive an upfront payment and certain other milestone payments from Merck under the collaboration terms. Per the terms of the deal, Merck has an option to nominate up to three targets and sign a drug discovery collaboration agreement with Absci for the same. Upon exercise of the option, Absci will be eligible to receive up to $610 million in upfront and milestone payments from Merck for all three targets. Merck will also fund research activities for the three targets and successful development can lead to royalties on sales.

Absci had its initial public offering (“IPO”) on Jul 21, 2021 and its shares started trading on Nasdaq Global Select Market on Jul 22.

Shares of Absci were up 17.1% on Jan 7, following the announcement of the research collaboration. However, the company’s shares have declined 68.6% since its IPO compared with the industry’s decrease of 25.6% in the same period. 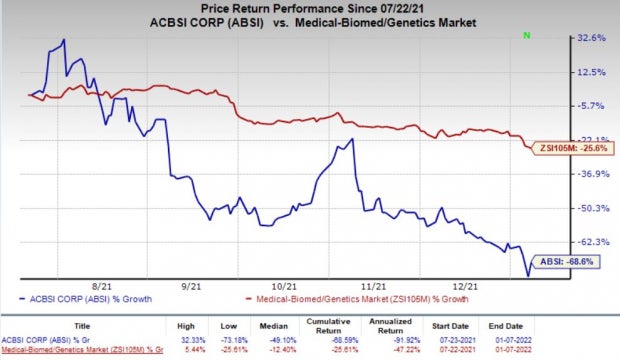 Amgen is obligated to pay up to $1.9 billion in milestone payments to Generate Biomedicines for the development of the five targets.

The companies with conventional drug-discovery platforms are also trying to incorporate AI and ML to improve their platforms. Ligand Pharmaceuticals (LGND - Free Report) is one of the early birds that is using AI in its drug discovery technologies.

NuVasive (NUVA) Gets FDA Nod for Attrax Putty Expanded Use