Should You Buy Construction Stocks with Interest Rates Set to Increase?

The Fed generally raises interest rates either because it seeks to slow down an overheated economy where imbalances are creeping in or because inflation has become too much of a problem.

Since the pandemic has hurt large sections of the economy that have merely survived because of the stimulus while several other sections are still making the most of the reopening, it’s safe to say that overheating was not behind the recent rate hiking decision. On the other hand, inflation has soared to 40-year highs with the need for immediate action.

The government is taking steps to tackle price hikes in specific areas. For example, a third of the overall inflation is estimated to have come from higher auto prices, linked to a semiconductor shortage. So steps to secure the required semiconductors from external suppliers have been taken. And a bill to increase America’s own production is under consideration. Rising food prices, particularly meat prices possibly stemming from price hikes at large packagers is also an area of focus.

But these actions are insufficient to deal with the larger problem, and in the case of semiconductors, they will also take time to bear fruit. So rate hikes are the obvious solution. And because they have the effect of slowing down the economy they come with some pain points-

Most companies will as a result see their financing costs increase. While this seems obvious, not all companies and not all business will be immediately affected. Longer-term borrowings at fixed rates are generally not affected by this while new project costs in businesses that operate on a project basis, will see a more immediate effect. Construction companies could see both of these things playing out for them.

The labor market has in any case been very hot of late, as the reopening is increasing demand while the virus continues to get more people off the job either because of infections or child care issues. So wages are increasing across the board, but more so for workers that have to be physically present on the job. This adds to the pain for construction companies.

While the labor problem is a current issue not linked to the rate hike, another issue, which is potentially a big problem for construction companies, is that higher interest rates usually lead to weaker demand, particularly in the construction market. That’s because higher rates are linked to higher mortgage rates, which impact affordability.

But is it really as bad as that? Let’s see.

The construction sector, particularly the home builder segment, was terribly overheated the last two years as demographic drivers were surpassed by the need to operate from home while labor and lot constraints impacted inventory buildup. As a result, home prices went through the roof. This led many to postpone purchasing.

With mortgage rates expected to rise in response to increasing bond yields as a result of the rising interest rate, homes could become out of reach for even more people, further softening demand. In normal circumstances, softening demand is of course negative. But this market can’t keep up with the level of current demand. So if there is less demand, it will allow builders to satisfy it and perhaps also add to inventory.

Until we have more inventory, prices aren’t going to come down. And until that happens, many people will not be able to buy. The point is, although demand will soften, it won’t soften enough (at least in the next year or so) to hurt builders. Because there’s a lot pent up.

Second, if builders had been coming off a weak period for them, they may not have been able to take the pressure, particularly from rising material costs. But most have done extremely well over the past two years both in terms of revenue generation and profitability. So clearly, that isn’t an issue.

Third, the National Association of Realtors expects mortgage rates to be at or above 3.5% by the end of 2023 and this is still a very low rate compared to what it has been historically over the last several decades. So there shouldn’t be a material impact on demand.

Additionally, government Infrastructure spending is usually an offsetting factor for the sector although it doesn’t help homebuilders. And the government is looking to massively overhaul existing infrastructure over the next five years.

So, it is no wonder the Building Products - Home Builders industry is in the top 14% of 250+ Zacks-classified industries. And considering the above factors, this may be as good a time as any to invest in leading home building companies like KB Home (KBH - Free Report) , Lennar (LEN - Free Report) , Toll Brothers (TOL - Free Report) and D.R. Horton (DHI - Free Report) .

The only pandemic impact that D.R. Horton seems to have witnessed is a huge increase in business. And analysts expect continued momentum in both the current and following fiscal years ending in September. Accordingly, #2 (Buy) ranked D.R. Horton’s revenue and earnings are expected to grow a respective 21.5% and 27.6% this year. It is currently expected to be followed by a respective 7.5% and 6.3% growth next year. But since the revisions trend shows continued increases in analyst estimates over the last 90 days, actual growth for D.R. Horton could actually come in much stronger.

Additionally, because of the negative perception around a rate hike’s impact on the sector, the shares of all these companies have recently come in for punishment, giving them really cheap valuations, as seen in the chart below- 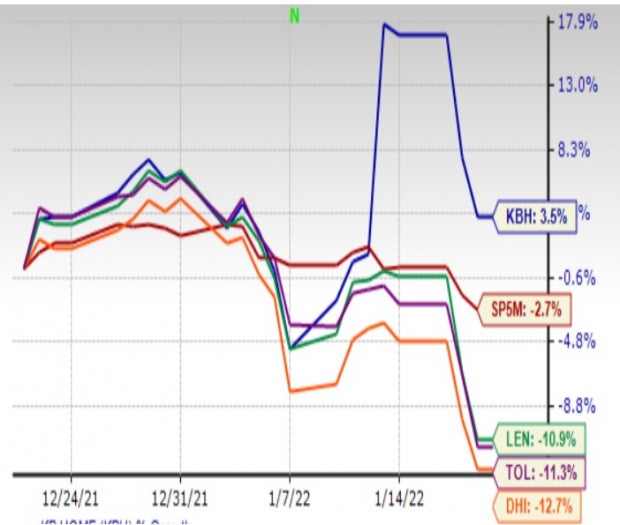 NextEra Energy (NEE) to Report Q4 Earnings: What to Expect