Energy companies have been under immense pressure due to the growing urgency from investors and environmentalists to curb climate change. ExxonMobil has set detailed targets for reducing emissions from major facilities and assets. Hence, the oil giant can effectively drive the transition to clean energy.

ExxonMobil's net-zero plan involves emissions associated with its oil, gas and chemical production. XOM also commits to carbon neutrality for its Scope 1 and Scope 2 greenhouse gas emissions by 2050. However, the plan doesn’t cover emissions from the use of its products, including gasoline and other fuels, which constitute the majority of XOM’s emissions. It also doesn’t involve oilfields and other non-operating assets.

In 2020, ExxonMobil released the equivalent of 111 million tons of carbon dioxide from its facilities, suggesting a 6% decline from the previous year. XOM is taking a systematic approach to support the transition to a low-carbon, more resilient future. The company identified more than 150 feasible measures and modifications, which can be applied to assets in its upstream, downstream and chemical operations.

In December 2021, ExxonMobil pledged to achieve net-zero emissions from operated assets in the Permian Basin by 2030. The move was part of a company-wide effort to reduce upstream greenhouse gas emission intensity by 40-50% by 2030 from the 2016 levels.

ExxonMobil intends to spend $15 billion on low-carbon projects through 2027. This comprises technological developments that are currently non-commercial such as carbon capture and storage, hydrogen power, and biofuel from algae.

Shares of ExxonMobil have outperformed the industry in the past three months. The XOM stock has gained 18.2% compared with the industry's 9.4% growth. 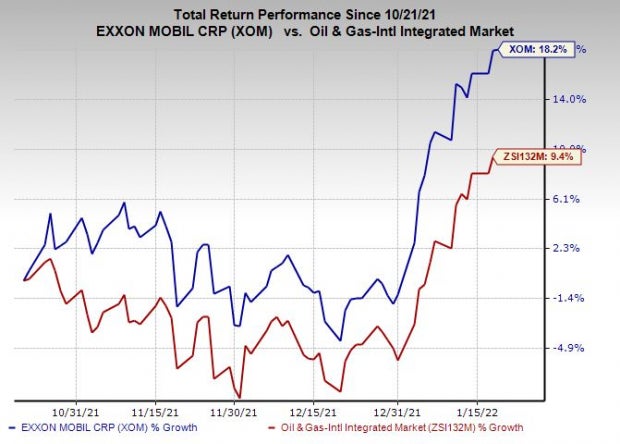 Investors interested in the energy sector might look at the following companies that presently sport a Zacks Rank #1. You can see the complete list of today's Zacks #1 Rank stocks here.

Royal Dutch Shell plc is a fully integrated energy company as it participates in every aspect related to energy, from oil production to refining and marketing. As of 2020-end, Shell likely had proved reserves of 9.1 billion barrels of oil equivalent.

The BG acquisition has made Shell the largest liquefied natural gas (or LNG) producer in the world. With LNG demand likely to rise significantly in the near to medium term, RDS.A’s position as a major supplier of LNG should help the company meet the fuel’s growing demand and aid cash flow improvement.

Equinor ASA (EQNR - Free Report) is one of the premier integrated energy companies in the world, with operations spreading across 30 countries. Over the years, EQNR has developed its expertise to expand upstream operations outside of conventional offshore resources to the prolific shale oil and gas plays.

Equinor’s key strategy is to capitalize on the renewable energy space and align operations with the Paris Climate Agreement. Thus, to combat climate change, EQNR is investing actively in renewable energy projects, comprising power generation from solar and wind energy. Equinor expects to boost production capacities from renewables to 4-6 GW by 2026.

PetroChina currently has a Zacks Style Score of A for both Value and Momentum. In the first six months of 2021, PTR’s upstream segment posted an operating income of RMB 30.9 billion, nearly tripling from the year-ago profit of RMB 10.4 billion.