3 Stocks to Buy on the Dip Amid the Market Selloff

Today’s episode of Full Court Finance at Zacks dives into the continued market selloff that’s pushed the S&P 500 into correction territory and sent the Nasdaq down around 15% from its highs. In the face of the selling and the uncertainty, investors with long-term horizons might want to consider buying strong stocks at solid discounts.

The Nasdaq officially entered correction territory (down 10% or more from its highs) last week as Wall Street dropped tech stocks to start 2022. Things have turned far worse since last Wednesday, with the Nasdaq down around 15% from its records. Meanwhile, the S&P 500 fell over 10% at one point Monday, before the market clawed its way back to close in the green.

Both indexes posted their worst week since the pandemic started last week and both sit below their 200-day moving averages for the first time since the initial covid selloff. The brutal start to 2022 tracks alongside lingering covid worries and soaring prices, and the corresponding fears about higher interest rates. The 10-year U.S. Treasury yield hit two-year highs last Tuesday at around 1.88%. The yield has, however, slipped slightly since then to around 1.75%. 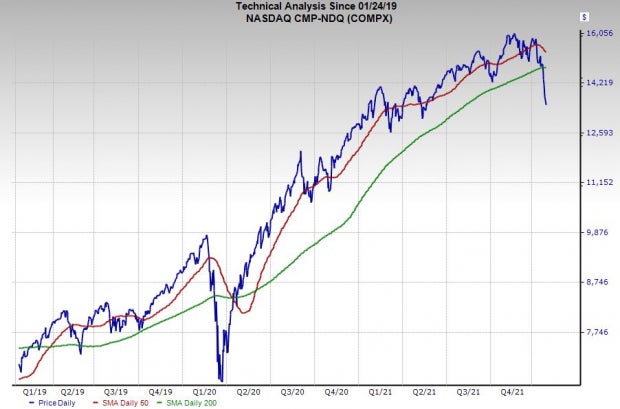 Rapid selling can be scary and it can really hurt. Thankfully, buyers start to step in eventually and pick up strong stocks at discounts when things appear to be overdone. In fact, the market experienced some of that Monday, as all three major indexes recovered their earlier losses—the Nasdaq was down over 4% at one point.

Taking everything into account, the market appears to be on relativity solid footing. That is hard to swallow sometimes when stocks are being crushed. That said, a big downturn was due after three years of big gains. And the fast selloff could mean the worst of 2022’s selling might already be in the rearview. Plus, the outlook for S&P 500 earnings, revenue, and margins remains strong for 2022 and 2023. And interest rates will have to climb a lot higher before they make stocks broadly unappealing (also read: 3 Things to Know About the Q4 Earnings Season).

The first stock up today is Target (TGT - Free Report) . The company thrived during the pandemic and Target’s e-commerce efforts set it up for success long after people return to their normal lives. Target is projected to post another year of huge top and bottom-line growth. The retailer’s recent fall and strong outlook has it trading at a discount to where it was prior to covid in terms of forward 12-month earnings.

The episode then takes a look at Apple (AAPL - Free Report) ahead of its first quarter fiscal 2022 financial release on Thursday, January 27. The iPhone maker is down around 13% from its early January peaks and Apple is nearing some oversold technical levels. All in all, investors with longer-term horizons might want to consider adding Apple as it expands its services unit and explores new futuristic growth areas with its mountains of cash.

The last stock on the list today is a name that’s been crushed in the past several sessions. Netflix (NFLX - Free Report) plummeted from over $500 a share to its current $385 range following its Q4 earnings release last Thursday. Netflix fell for a variety of reasons, including streaming competition and slowing user expansion. Despite the valid worries, Netflix is still the largest streaming TV player and prepared to grow at a solid clip for years to come. And the massive selloff has NFLX trading at rather enticing levels.

2 Stocks to Buy During Market Turbulence Before Earnings