5 Buy-Ranked Stocks Likely to Beat on Earnings This Week

Earnings season is closely watched on Wall Street because this is when investors gain access to management commentary, which helps them decide which stocks to buy and which to sell. It’s all about projecting the future performance of the company in the context of its most recent quarterly performance.

And it isn’t just about the performance either. Management commentary also includes their analysis of what transpired during the quarter. So for example, softer-than-expected orders would be negative on the face of things, but management could give us reasons such as orders being pushed into the next quarter as opposed to cancellations, which wouldn’t be necessarily as negative. Similarly higher-than-expected orders may not be as great as they appear to be because there may have been pull-ins from the next quarter.

Today, most investors are concerned about the impact of supply chain and labor issues, which are inflating costs and hitting margins. Companies have varying degrees of pricing power to pass this on to customers. So they may be impacted to varying degrees. Management commentary will help us understand how the situation is evolving for each company and the outlook will give us an idea of what the immediate future holds.

In normal situations, there is a direct reaction to this news in the form of share price movements. So prices could go up when things look good for the company and move in the opposite direction when there are negative surprises or other disappointing factors. But the resurgence of the virus and the Fed’s decision to hike interest rates are also important considerations in this earnings season. So there may not always be positive correlation between the results and prices.

This makes the prediction of an outcome somewhat less fruitful because there is less scope from which to uncover information. The Zacks earnings surprise prediction (ESP), in combination with the Zacks Rank, does the job regardless. And here are a few examples you may want to take a look at-

Vertex’s #2 (Buy) rank and earnings ESP of 4.98% are indicative of an earnings beat when the company reports on Jan 26. Historically, there seems to have been little correlation between the earnings results and share prices although its Value and Growth scores of B each make it a relatively safe name for investment.

Marten Transport offers truckload, dedicated and intermodal trucking services with a focus on the distribution of food and other consumer packaged goods that require a temperature-controlled or insulated environment.

Marten Transport’s #2 rank along with its earnings ESP of 1.89% indicate that it will beat earnings when it reports after the bell today. But if you were hoping to pick up the shares on the chance that there will be a positive reaction, you’d better keep in mind that it has almost never reacted positively to positive surprises. On the other hand, since it has also scored an A for both value and growth, it seems like a relatively safe bet right now.

Nucor shares carry a Zacks Rank #1 (Strong Buy), which along with the earnings ESP of 0.0% indicate that the company will post a positive surprise when it reports on Jan 27. In 2021, the shares have reacted to earnings news although there has been more of a negative reaction to misses than a positive reaction to beats. But since it has scores a B for both growth and value, it looks like a relatively safe play.

Since Seagate shares carry a Zacks Rank #2 and its earnings ESP is 0.0%, the company has a reasonable chance of beating estimates when it reports on Jan 26. Seagate has a relatively strong history of posting positive surprises but the reaction to these surprises has been a bit erratic. But given its Value Score of B and Growth Score of A, Seagate looks like a relatively safe stock to invest in.

Poultry processing company Sanderson Farms produces and distributes fresh, frozen and minimally-prepared chicken products, which are then sold to retailers, distributors, casual dining operators and to resellers of frozen chicken for export.

Sanderson Farms’ Zacks #1 Rank and 0.0% ESP indicate an earnings beat when the company reports on Jan 27. In 2021, investors have barely responded to its huge positive surprises, so let’s see what they do this year. It’s worth noting however that Sanderson Farms shares are relatively safe since they’ve scored A for both value and growth. 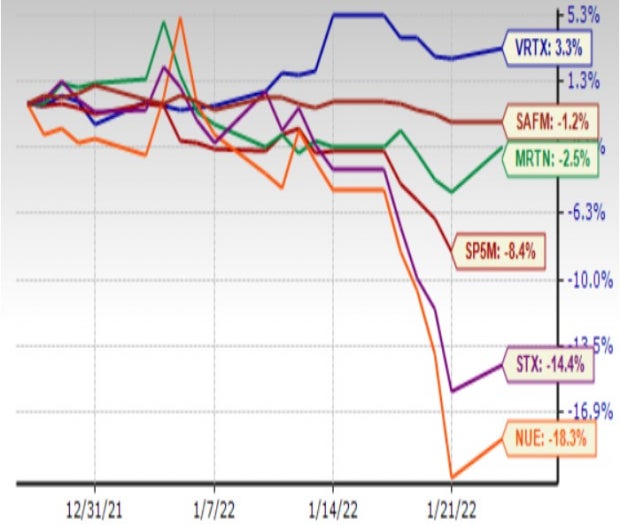