Sally Beauty Holdings, Inc. (SBH - Free Report) reported first-quarter fiscal 2022 results, with the bottom line increasing year over year and beating the Zacks Consensus Estimate. The top line missed the consensus mark but increased year over year. Sales increased across both the segments through which the company operates. The quarterly results benefited from solid demand for core categories of color and care.

Sally Beauty is focused on its four strategic growth pillars to boost the top line in fiscal 2022. These include leveraging the digital platform, driving loyalty and personalization, undertaking product innovation and enhancing the supply chain.Management reiterated its fiscal 2022 outlook.

Sally Beauty reported adjusted earnings of 63 cents per share, which surpassed the Zacks Consensus Estimate of 60 cents. The metric increased from 50 cents reported in the year-ago quarter. The upside can be attributed to top-line growth and better gross profit performance.

The company reported selling, general and administrative (SG&A) expenses of $386.3 million, up $20.1 million, mainly due to higher labor costs, escalated expenses from international markets associated with re-opening and planned marketing investments. As a percentage of sales, SG&A expenses came in at 39.4%, up from 39.1% reported in the year-ago quarter.

Sally Beauty Supply: Net sales in the segment rose 2.5% to $561.5 million. Unfavorable foreign exchange had a negative impact of 20 bps on sales. The segment’s comparable sales rose 4.4%. Net store count at the end of the quarter was 3,529, lower by 116 stores from the year-ago quarter’s level.

Beauty Systems Group: Net sales in the segment increased 7.8% to $418.7 million. Foreign-currency translations had nearly 30 bps positive impact on results. Further, the segment’s comparable sales moved up 8.6%. Net store count at the end of the quarter was 1,364, down by 20 stores from the year-ago quarter’s level. Total distributor sales consultants at the end of the quarter were 719 compared with 702 in the year-ago period.

The company ended the reported quarter with cash and cash equivalents of $298 million, long-term debt (including capital leases) of $1,381.9 million and total stockholders’ equity of $281 million.

During the first quarter, the company used cash flow from operations of $5.7 million. Capital expenditures came in at $26.4 million during this time. 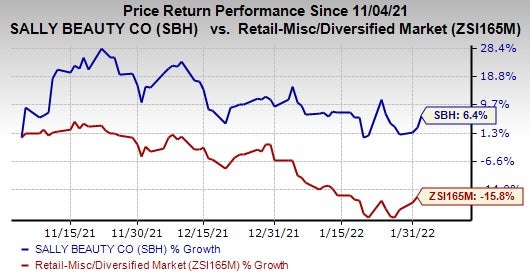 Sally Beauty expects fiscal 2022 net sales growth of 3-4% year over year. Net store count is anticipated to decline in the range of 1-2%, reflecting management’s focus on optimizing the store portfolio. The gross margin is likely to expand 40-60 bps year over year. Adjusted operating margin is envisioned to remain nearly flat year over year.

Shares of this Zacks Rank #3 (Hold) company have gained 6.4% in the past three months against the industry’s drop of 15.8%.

DICK'S Sporting Goods, a sporting goods retailer, currently sports a Zacks Rank of 1 (Strong Buy). DKS has a trailing four-quarter earnings surprise of 104.2%, on average. Shares of DKS have lost 11.4% in the past three months.

The Zacks Consensus Estimate for DICK'S Sporting Goods’ current financial year sales and earnings per share (EPS) suggests growth of 27.8% and 151.6%, respectively, from the year-ago period’s reported figure. DKS has an expected EPS growth rate of 11.7% for three-five years. You can see the complete list of today’s Zacks #1 Rank stocks here.

MarineMax, a recreational boat and yacht retailer, sports a Zacks Rank #1. The company has a trailing four-quarter earnings surprise of 55.8%, on average. Shares of HZO have declined 12.3% in the past three months.

The Zacks Consensus Estimate for MarineMax’s 2022 sales and EPS suggests growth of 11.8% and 16.2%, respectively, from the year-ago period’s levels.

Tractor Supply Company, a rural lifestyle retailer, currently carries a Zacks Rank of 2 (Buy). TSCO has a trailing four-quarter earnings surprise of 22%, on average. Shares of TSCO have gained 1.3% in the past three months.

The Zacks Consensus Estimate for Tractor Supply’s 2022 sales and EPS suggests growth of 8.2% and 6%, respectively, from the year-ago reported figure. TSCO has an expected EPS growth rate of 9.8% for three-five years.

The Estee Lauder Companies (EL) Beats on Earnings in Q2