Here's Why You Should Retain Nevro (NVRO) Stock For Now

Nevro Corp. (NVRO - Free Report) is well poised for growth in the coming quarters, backed by its solid foothold in the Spinal Cord Stimulation (“SCS”) market. A solid third-quarter 2021 performance, along with its strong international prospects, is expected to contribute further. However, stiff competition and strict regulatory requirements persist.

The renowned global medical device company has a market capitalization of $2.26 billion. The company projects 27.7% growth for 2022 and expects to maintain its strong performance. Nevro surpassed estimates in three of the trailing four quarters and missed the same in the other one, the average earnings surprise being 13.2%. 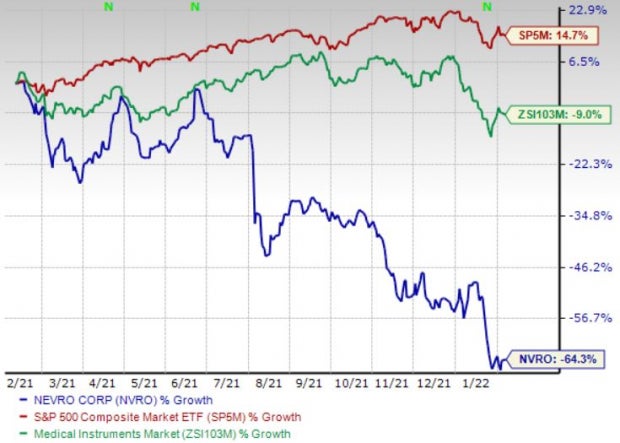 Solid Foothold in SCS market: Nevro’s foothold in the global SCS therapy business raises our optimism on the stock. The company, in January, received the FDA’s approval for expanded labeling for its Senza System associated with the treatment of non-surgical refractory back pain (“NSRBP”). The approval, specific to Nevro's exclusive 10 kHz Therapy, categorizes the Senza System as the only SCS system with specific labeling to treat NSRBP patients.

The same month, Nevro announced that UnitedHealthcare — one of the businesses of UnitedHealth Group — will offer coverage for Nevro’s high-frequency 10 kHz Therapy for treating painful diabetic neuropathy (“PDN”) for dates of service on or after Mar 1, 2022.

International Prospects: We are optimistic about Nevro’s global outreach. The company currently sells its Senza SCS system in Europe and Australia through a network of sales agents and independent distributors. As of Dec 31, 2020, Nevro sold Senza directly in the Netherlands, Austria, Switzerland, United Kingdom, Sweden, Australia, Belgium, Luxembourg, Norway and Germany. The company also sold the same via distributors and agents based in Spain, Italy, Slovakia, Turkey and Kuwait.

Regulatory Requirements: Nevro’s products are subject to extensive regulations in the United States and elsewhere, which are complex and have tended to become more stringent over time. Regulatory changes could result in restrictions on Nevro’s ability to carry on or expand its operations, higher-than-anticipated costs or lower-than-anticipated sales. Failing to maintain the FDA approval could result in unexpected and significant costs for the company and consume management’s time and other resources.

Stiff Competition: Nevro operates in a highly competitive medical device industry, which is subject to technological change. The company’s success depends partly upon its ability to establish a competitive position in the neuromodulation market by securing broad market acceptance of its HF10 therapy and Senza products for the treatment of approved chronic pain conditions. Any product developed by Nevro that achieves regulatory clearance or approval will have to compete for market acceptance and market share.

Nevro witnessed a negative estimate revision trend for 2021. In the past 90 days, the Zacks Consensus Estimate for its loss per share has widened from $3.77 to $3.79.

The Zacks Consensus Estimate for the company’s fourth-quarter 2021 revenues is pegged at $99.3 million, suggesting a 9.5% plunge from the year-ago quarter’s reported number.

AMN Healthcare has an estimated long-term growth rate of 16.2%. AMN’s earnings surpassed estimates in the trailing four quarters, the average surprise being 19.5%. It currently flaunts a Zacks Rank #1 (Strong Buy). You can see the complete list of today’s Zacks #1 Rank stocks here.

AMN Healthcare has gained 30.4% against the industry’s 60.7% fall over the past year.

Cerner, carrying a Zacks Rank #2 (Buy), has an estimated long-term growth rate of 12.8%. CERN’s earnings surpassed estimates in three of the trailing four quarters, the average surprise being 3.2%.

Henry Schein has an estimated long-term growth rate of 11.8%. HSIC’s earnings surpassed estimates in the trailing four quarters, the average surprise being 21.9%. It currently carries a Zacks Rank #2.

Henry Schein has gained 8% compared with the industry’s 4.1% rise over the past year.