Shares of Ironwood were down 3.6% on Feb 17, following lower-than-expected earnings result. However, the company’s shares have gained 13.9% in the past year against the industry’s decrease of 31.8%. 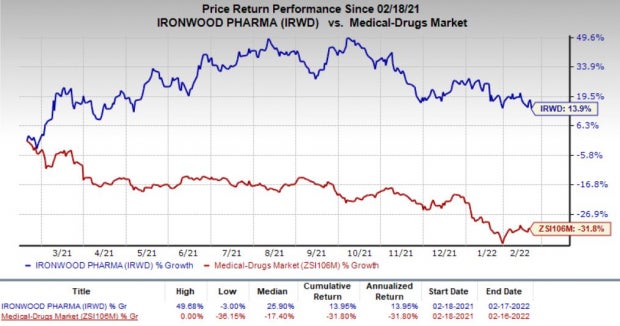 Ironwood's share of net profits from the sales of Linzess in the United States (included in collaborative revenues) was $113.7 million in the fourth quarter, up 2.7% year over year.

Per data provided by IQVIA, the prescription volume for Linzess capsules in the fourth quarter increased about 10% year over year.

The company recorded $3.4 million in royalties and other revenues compared with $6 million in the year-ago period.

We note that Ironwood has agreements with two partners — Astellas Pharma and AstraZeneca (AZN - Free Report) — related to the development and commercialization of Linzess in Japan and China, respectively. Ironwood records royalties on sales of Linzess from Astellas and AstraZeneca in their respective territories.

Selling, general and administrative expenses were down 15.9% year over year to $28.6 million during the fourth quarter. Research & development expenses nearly doubled year over year to $31.9 million. The R&D expenses included a payment of 19.5 million related to collaboration and license option agreement with COUR Pharmaceutical for adding a new candidate to its pipeline.

Ironwood reported revenues of $413.8 billion, up 6.2% year over year. Sales were primarily driven by its share of the net profits of $400.4 million from the sales of Linzess in the United States. The drug’s total sales were $1 billion for the full year.

The company’s adjusted earnings for 2021 were $1.16 per share, up 46.8% from the year-ago period as margins improved with an efficient capital allocation strategy.

The company expects adjusted EBITDA to be more than $250 million for the year.

Earnings per share estimates for Collegium have narrowed from $3.52 to $5.86 for 2022 in the past 30 days. Collegium’s shares have gained 15.2% so far this year. Collegium has a four-quarter average negative earnings surprise of 22.76%.