Great Panther Mining Limited (GPL) reported fourth-quarter 2021 adjusted loss per share of 3 cents that came in wider than the Zacks Consensus Estimate of a loss of 2 cents per share. The company had delivered earnings per share of 4 cents in the prior-year quarter.

Revenues plunged 38% year over year to $43 million in the fourth quarter. The top line surpassed the Zacks Consensus Estimate of $40 million.

Great Panther produced 24,284 gold equivalent ounces in the fourth quarter of 2021, which was 34% lower than the year-ago quarter.

Great Panther reported an loss per share of 12 cents in 2021 against break-even earnings reported in the prior year. Sales were down 29% year over year to $185.7 million. Lower metal sales volumes were partially offset by higher realized prices for silver, lead and zinc, leading to lower revenues in the year. 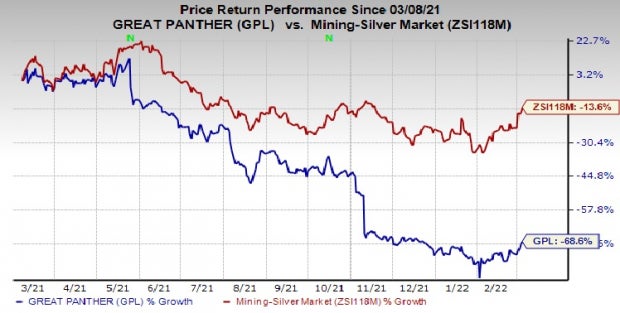 Great Panther’s shares have fallen 68.6% in a year’s time, compared with the industry’s decline of 13.6%.

Teck Resources beat the Zacks Consensus Estimate for earnings in three of the trailing four quarters and missed once, the average surprise being 13%. TECK’s shares have surged around 96% in a year.

Cabot has a projected earnings growth rate of 7.6% for the current year. The Zacks Consensus Estimate for CBT’s current-year earnings has been revised upward by 8% in the past 60 days.

Cabot beat the Zacks Consensus Estimate for earnings in each of the trailing four quarters, the average surprise being 21.6%. CBT has rallied around 38% in a year.

Allegheny has an expected earnings growth rate of a whopping 661.5% for the current year. The Zacks Consensus Estimate for ATI's current-year earnings has been revised upward by 46% in the past 60 days.

Allegheny beat the Zacks Consensus Estimate for earnings in each of the trailing four quarters, the average surprise being 127.2%. ATI has rallied around 25% over a year.