Nevro Corp. (NVRO - Free Report) recently announced that Noridian has released an update to their Local Coverage Billing and Coding article for spinal cord stimulators for chronic pain to include two new ICD-10 codes that cover Painful Diabetic Neuropathy (“PDN”). The modification, which was made on Mar 4, 2022, is effective for procedures performed on or after Jan 1, 2022.

It is to be noted that Noridian is the Medicare Administrative Contractor (“MAC”) overseeing the majority of the western United States.

Significance of the Coverage Decision

Per management, the positive coverage decision by Noridian is a very favorable development for the Medicare-aged population covered by the MAC, as this is expected to offer better access to Nevro's proprietary 10 kHz Therapy for PDN patients.

The latest favorable coverage by Noridian follows the recent positive coverage decision by UnitedHealthcare in January. Per the company press release, this “increases coverage in the US to approximately 43% of PDN patients, up from approximately 25% of patients at the end of 2021.”

Per a report by Market Data Forecast, the global SCS market was estimated to be $1,871.6 million in 2020 and is anticipated to reach $2,827.4 million by the end of 2025 at a CAGR of 8.6%. Factors like rising cases of chronic and neuropathic pain, and growing adoption of SCS therapy are likely to drive the market.

Given the market potential, the latest positive coverage is expected to significantly boost Nevro’s business worldwide.

In January, the company received the FDA’s approval for expanded labeling for its Senza SCS System associated with the treatment of NSRBP. The approval, specific to Nevro's exclusive 10 kHz Therapy, categorizes the Senza System as the only SCS system with specific labeling to treat NSRBP patients. 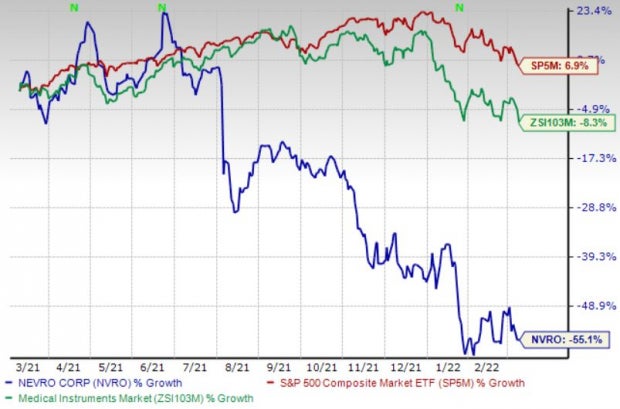 Henry Schein, flaunting a Zacks Rank #1 (Strong Buy) at present, has an estimated long-term growth rate of 11.8%. HSIC’s earnings surpassed estimates in the trailing four quarters, the average beat being 25.5%. You can see the complete list of today’s Zacks #1 Rank stocks here.

Henry Schein has gained 27.8% compared with the industry’s 5.8% growth over the past year.

Allscripts has an estimated long-term growth rate of 16.3%. MDRX’s earnings surpassed estimates in the trailing four quarters, the average beat being 64.8%. It currently carries a Zacks Rank #2 (Buy).

Allscripts has gained 36.9% against the industry’s 50.8% fall over the past year.

AMN Healthcare has gained 33.1% against the industry’s 57.6% fall over the past year.